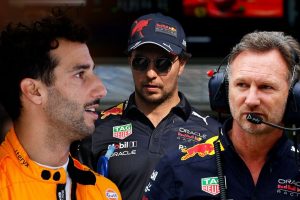 Christian Horner on Red Bull's success and hints at next step

Christian Horner has appeared to deny that Daniel Ricciardo could replace Sergio Perez as a Red Bull driver. Horner said Perez and Verstappen’s partnership has been “phenomenal” for the team as he stressed the pair have a “good relationship” despite a recent team orders feud.

The Red Bull team principal added that the team see no reason to make changes to their line-up despite signing Ricciardo as the team’s reserve driver. Horner explained: “Daniel’s contract is very specific for a specific reason.

“We have a contract with Checo for the next two years and he has made a good step this year. He felt more comfortable in the team at the beginning of the year after joining in that first year during a Covid period.

“What the partnership of Max and Checo had produced has been phenomenal for us.” He added: “They’ve raced well for the team, and we’ve got no reason to see that being any different tomorrow or for the duration of their contractual commitment to the team thereafter.”

Horner’s remarks come after suggestions that Perez could be replaced by Ricciardo as tensions rise at Red Bull. Perez hit out at the Dutchman for refusing to follow team orders in Brazil, moaning the incident shows “who he really is”.

Ralf Schumacher said he was “not 100 per cent sure” Perez would still be at the team next season and also admitted Ricciardo “had a good chance” of replacing him. Damon Hill has also predicted that Ricciardo could secure a race seat at the team if the two current drivers’ relationship continues to wane.

Hill commented: “It could be quite an interesting one if you think about the problems they have apparently had between Max and Sergio.

“Let’s say the toys go out of the pram and there is some sort of fall out there, Daniel Ricciardo could be in prime position.” He added: “I’m sure Sergio’s contract is watertight and he’ll be there a long time.

“But if relationships deteriorate, sometimes it becomes unworkable and suspicion is Max has quite a lot of power within that team.” Ricciardo has made it clear he is eyeing a return to full-time racing for 2024 after he was let go by McLaren for highly-rated rookie Oscar Piastrru earlier this season.

However, the Australian seemed less optimistic about a return at the Abu Dhabi Grand Prix. The 33-year-old was spotted with a camera on the drivers’ parade and gave a bizarre response when asked if he was sure it was not his final race. He replied: “I don’t know. We’ll see.”