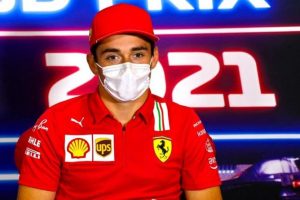 Charles Leclerc found it “difficult to enjoy” the British Grand Prix after missing out on his first win of the season after Lewis Hamilton took the chequered flag in a dramatic race which saw Max Verstappen crash out on the opening lap. Leclerc found himself leading the British Grand Prix after the restart after climbing ahead of Hamilton following Verstappen’s crash.

Hamilton was fully expected to overtake Leclerc at the restart, but the Ferrari driver impressively held on to first place.

And the seven-time world champion was struggling on the medium compound to get close to Leclerc.

Both drivers decided to go long on the medium compound before Hamilton pitted first, where he had to take his 10-second penalty.

That pushed Hamilton further down the grid before Leclerc pitted with the 23-year-old holding a strong advantage over his rival.

Hamilton quickly got past Lando Norris before Valtteri Bottas was ordered to get out of his team-mate’s way, who was lapping a second quicker than Leclerc.

The trajectory was for Hamilton to catch Leclerc on the final few laps of the race and it finally happened with two laps to go.

The 36-year-old made the some move at Copse which saw him make contact with Verstappen in the opening lap, only this time there was no collision with Leclerc as Hamilton made the move stick.

Leclerc was unable to catch Hamilton from that point, but the Ferrari driver was overall pleased with the result.

“It was just not enough in the last two laps.

“Congratulations to Lewis, he did an incredible job and it’s amazing to see as many fans in the grandstand.

“It was fun in the car but it just lacked a bit of pace at the end.”

He added: “We definitely did not expect it. We expected, after qualifying, to be quite competitive, but not as competitive as now.

“We’ve been fighting for the win which was incredible and on the medium we were actually quick.

“Then on the hard we lacked a bit of pace compared to the Mercedes, but overall it was much stronger than we are used to.”