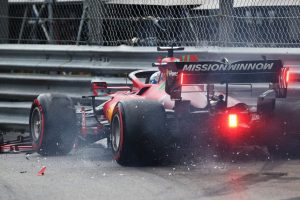 Charles Leclerc will not race in the Monaco Grand Prix this afternoon after his crash in Saturday's qualifying session.

The 23-year-old managed to secure pole position for his hometown race yesterday.

But a crash soon after brought the red flags out and meant an abrupt end to the street session, leaving Red Bull's Max Verstappen fuming.

But the Dutchman will now start ahead the chasing pack after Leclerc was forced to pull out of the race moments before the start.

Ferrari have revealed that a left driveshaft problem on the car was impossible to fix in time for the race.

However, just hours before the race, the Italian team confirmed there was no problems with the gearbox, giving Leclerc the all clear to start at the front of the grid.

“Following further in-depth checks this morning, no apparent defects were found on Charles Leclerc’s gearbox,” said Ferrari in a statement.

“Therefore, the Monegasque driver will start today’s race from pole position, as per the qualifying result.”

“It is a shame to finish in the wall,” said Leclerc after the qualifying session.

“It doesn’t feel the same but I am incredibly happy with my first lap.

“I have mixed feelings because I don’t know where I am starting. It depends on the damage of the car. I hope it is not damaged enough so we have to start at the back.

“I was on the last lap and trying to do more in the final sector and I hit the barrier on the inside and I went straight into the wall.

Leclerc has had a tricky start to the season, alongside Ferrari counterpart Carlos Sainz.

But Lewis Hamilton and Verstappen have started well and look set to battle it out for the world championship this year.