Home » NHL » Wyshynski: Mike Smith is the most fascinating player in the 2022 Stanley Cup playoffs 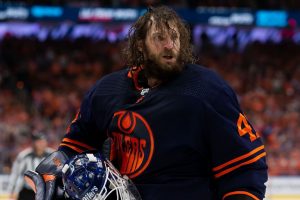 Edmonton Oilers goaltender Mike Smith is an agent of chaos. He’s the most exhilarating player in the 2022 Stanley Cup playoffs, according to Edmonton-area cardiologists.

His teammate, Connor McDavid, is the playoffs’ most exciting and entertaining player. To watch him play is to watch poetry in motion. To watch Smith play is to watch the embodiment of a Reddit comment, where every third word is capitalized and misspelled.

In “The Matrix,” savior proxy Neo and his nemesis Agent Smith existed as the result of the machines’ equations trying to balance themselves. In essence, the Oilers’ Aged Smith balances McJesus’ algorithm. Hockey needs Smith’s struggles with the basic laws of gravity to revel in how McDavid defies them. Hockey needs Smith surrendering goals as an enticement for McDavid to score more of them.

Yet hockey needs those few timely, undeniably clutch saves from Smith to deliver victory to the Oilers, to ensure that McDavid’s ethereal performances aren’t wasted.

Smith is 40 years old and in his 16th NHL season. His long hair and scraggly playoff beard make him look like a 1990s alt-rocker on a 2022 reunion tour. There’s a gangly weariness to his comportment, which is to say that he carries himself like someone who has seen nearly 21,000 shots at his goal between the regular season and the playoffs in his career. His goaltending style is less technical refinement than “by any means necessary to save pucks.”

“He plays intensely deep in his net and comes way, way out to play the puck,” said Cat Silverman, a goaltending analyst who covered Smith as a journalist during his time with the Arizona Coyotes. “When he’s feeling it, he’s unstoppable, because he has such a command. So few other goalies can replicate it. But if he’s off by just a little bit, he looks like he’s a hot mess.”