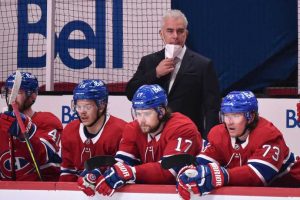 It might not have been as obvious as a player missing from the bench and all the space that it creates, but the Canadiens were without a key component for Game 1 of their Stanley Cup Final against the Lightning on Monday. Head coach Dominique Ducharme was out due to a required COVID-19 quarantine. He will also be absent for Game 2 with his team trailing 1-0 in the best-of-seven series.

It was revealed on June 19 that the bench boss tested positive for COVID-19. He has missed every Canadiens game beginning with Game 3 of the semifinals against the Golden Knights.

“Being vaccinated twice, the chances are really slim,” Ducharme told reporters on June 20. “I really wasn’t lucky on this one. … It’s frustrating because I’ve been doing everything they asked us to do. I never exposed myself.”

Ducharme had both doses but was still within the two-week window before becoming fully vaccinated. He was just eight days out from getting his second jab.

“I know personally it would be killing [me] inside to miss the grandest ball of them all, and that’s the Stanley Cup Final,” Lightning coach Jon Cooper said before adding: “This is a time you should enjoy, and for him to have a team be in the final and not be part of it, I feel for him, even if he’s the competition.”

Assistant coach Luke Richardson assumed the top spot and led the team to a 4-2 series win against the Golden Knights. Richardson played 27 games for the Lightning in 2006-07. Ducharme told reporters after the semifinals ended that he’s been watching games with his girlfriend and that during intermissions he speaks to his staff for a few minutes — just like he would if he was there in person.

“We’ve always worked together, and that’s what we’re continuing to do,” he said. “Luke, we talked, and he’s a team guy, he’s the kind of teammate you want to have with you facing no matter what challenge. Everyone’s playing their role and working together. What we’re doing today is preparing the team in the same way we did for the other series. It’s just that I’m doing it via video with the players.”

“Yeah, he’s on Zoom. He’s involved in the meetings,” defenseman Jon Merrill said before Game 2. “He’s involved in the process. Not obviously as much as he was before he got struck with COVID, but he’s definitely still a big part of this team and we look forward to seeing him when we get back to Montreal.”

Ducharme is expected back for Game 3, which is scheduled for Friday in Montreal.

Montreal forward Joel Armia was also in COVID-19 protocols over this past weekend. Armia, who normally slots in on the fourth line, was separated from the team but cleared on Monday. He flew to Tampa on Monday on a private plane and skated in warmups but did not take line rushes and was scratched. Montreal lost the opener 5-1. Per the lines at Game 2’s morning skate, it looks as if he will slot back in on Wednesday.