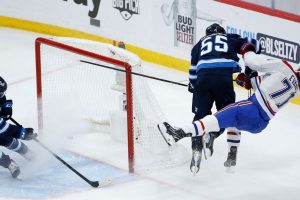 Winnipeg Jets star center Mark Scheifele defended his hit that put Montreal Canadiens forward Jake Evans on a stretcher and said the NHL was “excessive” in giving him a four-game suspension for it.

“I think it was pretty excessive. I wasn’t expecting that. I was pretty shocked. But that’s their decision,” Scheifele said in a news conference Friday, hours before Game 2 of their series.

With 56.9 seconds remaining in Game 1 of the North Division final Wednesday night, Evans scored into an empty Winnipeg net to clinch a 5-3 victory for Montreal. As he did, Scheifele skated into him at full speed, his right arm tucked to his body. The Canadiens forward fell hard to the ice, with the right side of his head hitting first.

Evans was stretchered off the ice and later diagnosed with a concussion. Scheifele was given a five-minute major for charging and a game misconduct, and the NHL handed down the four-game suspension Thursday, calling the collision “a high, predatory hit.”

The Jets center disagreed with that characterization.

“There’s a minute left in the game. We just scored. It’s a one-goal game. My only thought in my mind is to prevent a goal,” Scheifele said. “There’s no malice there, no intent. I don’t go in with the frame of mind of injuring a hockey player.”

The NHL argued that Scheifele made no effort to make a defensive play on the empty-net attempt and that, by taking his hand off his stick and turning his shoulder into Evans, he was “conceding the empty-net goal” and turning his attention to delivering “a hard, violent check to an opponent with the outcome of both the play and the game already having been decided.”

Scheifele pushed back on that too.

Scheifele said he reached out to a few Canadiens players, including friend Brendan Gallagher, and is praying for Evans to make a speedy recovery.

Jets coach Paul Maurice expressed surprise that Scheifele was given four games while admitting that he expected the NHL would suspend him for at least two games. Maurice contended that Scheifele’s record — having never been fined or suspended by the NHL before — and the nature of the hit made the suspension excessive.

“He’s a clean offensive player,” Maurice said. “I looked at that hit and I used the word ‘clean,’ and the reason that I used it is because the things that I call ‘dirty’ in a hit weren’t there for me. I don’t agree with the distance traveled argument, because there’s no other option in that distance traveled — on a straight line, meeting at a point of contact.”

Scheifele also cited his record — with 237 penalty minutes in 575 career regular-season games — as evidence that he didn’t intend anything malicious.

“The result is what sucks. Having a guy hurt is what no one wants in this league. The league made their decision. I don’t agree with it. No one knows what was going through my mind except myself. I tried to portray that to the league,” he said. “I keep coming back to my record. I had 12 penalty minutes this year. I had one boarding penalty in my entire career. I haven’t had a charging penalty. I don’t think I’ve had more than frickin’ 20 hits a year. My intention is not to injure. It’s to prevent a goal.”

The hit created instant animosity in the series. Montreal forward Jesperi Kotkaniemi called the play “disgusting,” and defenseman Joel Edmundson vowed revenge on Scheifele, saying “if he gets back in the series, we’re going to make his life miserable.”

Some fans also took that passion too far, according to Scheifele. He said his parents and other loved ones were getting harassing messages online and over the phone.

“I can accept the punishment. That’s what you sign up for. But the hate that my family has gotten, the bullying that they’ve gotten is completely unacceptable. It’s pretty gross to see. My parents are the salt of the earth. For them to get hate like that is awful,” he said. “There’s no reason to go after my loved ones. It’s completely unacceptable. But that’s our society nowadays.”

Scheifele is eligible to return for Game 6 of the series, which Montreal leads 1-0. If the Jets are swept, the final game from his ban will carry over to the next regular season.

Since the suspension was less than six games, Scheifele did not have the right to appeal to a neutral arbitrator. He could appeal only to NHL commissioner Gary Bettman, and Scheifele said he has chosen not to do so.

“I don’t want to be a distraction to this team,” Scheifele said. “It really wouldn’t have done anything anyway with the way the rules work.”