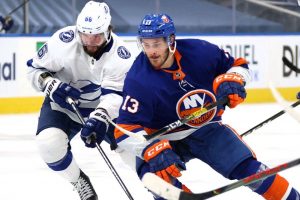 The altered format of the 2021 Stanley Cup playoffs — where the final four teams were reseeded based on regular-season record — meant that we could have gotten some wild matchups in the Stanley Cup semifinals. Or, as is the case with this series, we’ll get to see a rematch of the 2020 Eastern Conference finals, as the Tampa Bay Lightning take on the New York Islanders.

Beyond seeing these two elite teams square off again, there’s another factor that gives this series some juice: While the previous edition was held in the Edmonton bubble, this time around we’ll get to see (and hear) two zealous fan bases on full display.

Two great rosters. Two eternally wise coaching staffs. A lot of blue in the uniform sets. Let’s break it down position by position, assess the special teams and injury status of both clubs, and make a series pick.