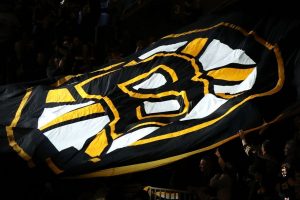 Kristen Shilton is a national NHL reporter for ESPN.

An off-ice official was injured during Game 3 of the first-round Stanley Cup playoff series in Boston on Friday when a panel of glass fell on him.

The Bruins were leading the Carolina Hurricanes, 3-1, in the second period when fans began repeatedly banging on the glass until it dislodged to land on the penalty-box attendant. The gentleman slumped immediately to the ground and was said to have been knocked out cold.

Trainers from both teams quickly came to his aid, and a stretcher was produced to transport the attendant for further medical attention.

The attendant had regained consciousness and was moving around as he departed the ice. Boston and Carolina players came over to check on his status during the lengthy delay of game and sent him off with a chorus of stick taps. The game broadcast first reported that his name is Joe Foley.

As play recommenced, the Bruins responded with a message for the attendant.

“Our thoughts are with the NHL off-ice official who was injured,” Boston wrote on its Twitter account. “We are sending him our best wishes.”

It was a rough night physically for others in Boston, too. Prior to the penalty-box incident, a referee was violently bowled over when a member of the Bruins’ ice crew collided into him with a garbage bin during a first-period TV timeout.

Carolina winger Jordan Martinook also left game with a lower body injury and was ruled out from returning.