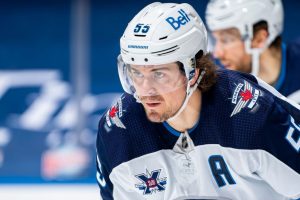 Winnipeg Jets center Mark Scheifele has been suspended four games by the NHL Department of Player Safety for a hit that put Montreal Canadiens forward Jake Evans on a stretcher at the end of Game 1 on Wednesday night.

The NHL announced the suspension Thursday night, calling Scheifele’s charge into Evans “a high, predatory hit” delivered with “excessive momentum gained from traveling a considerable distance” that resulted in the Canadiens forward suffering a concussion on the play.

With 56.9 seconds remaining in the game and Montreal leading by a goal, Evans scored into an empty Jets’ net on a wrap-around. As he did, Scheifele skated into him at full speed, with his right armed tucked to his body, and collided with Evans. Evans fell hard to the ice, with the right side of his head hitting first.

Evans left the ice on a stretcher around eight minutes later. Scheifele was given a five-minute major for charging and a game misconduct.

Scheifele argued in his hearing that his speed on the hit was an effort to make a defensive play and prevent a goal. That was echoed by Jets coach Paul Maurice earlier Thursday.

“You need to do anything you can to stop a goal from being scored,” Maurice said. “It was a heavy, heavy hit but it was clean. It’s part of the game. I don’t even like that phrase. Depending on what flag is on the car, you’ll have a different opinion on that. But their guy took a hit to make a play. Our guy made a hit.”

The NHL ruled, however, that Scheifele made no effort to make a defensive play on the empty-net attempt, saying he took his hand off his stick and turned his shoulder into Evans. The NHL read the action as Scheifele “conceding the empty-net goal” and that “his intention was to deliver a hard, violent check to an opponent with the outcome of both the play and the game already having been decided.”

This was the first supplemental discipline of Scheifele’s 10-year NHL career. Since the suspension is under six games, Scheifele can only appeal to NHL commissioner Gary Bettman. He’s unable to appeal to a neutral arbitrator, per the Collective Bargaining Agreement.

“It was a dirty hit,” Edmundson said. “But the league’s going to take care of it. If he gets back in the series, we’re going to make his life miserable.”

Scheifele won’t return to the series until at least Game 6, if the series lasts that long. Montreal holds a 1-0 lead in the North Division final, with Game 2 scheduled for Friday night.

If the term of the suspension is not fully served during the 2021 Stanley Cup Playoffs, the remaining game will be served at the beginning of the 2021-22 regular season.