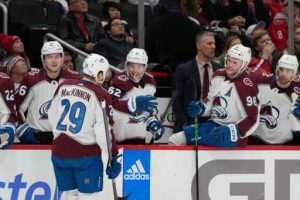 WASHINGTON, D.C. — Nicolas Aube-Kubel and Darcy Kuemper know better than anyone else living in the nation’s capital what Nathan MacKinnon can do with a puck. They were witnesses to his brilliance for one season, the longest season of his career at that. The season he went coast-to-coast for a playoff hat trick. The season he joined them in hoisting the Stanley Cup.

Aube-Kubel and Kuemper received their Avalanche championship rings after the game against their former team Saturday night. An hour or so earlier, as if to remind them of their season in Colorado, they were once again nothing more than witnesses to MacKinnon’s mastery.

The skilled center dangled Aube-Kubel out of his way then flicked an unstoppable wrister through traffic, past Kuemper and into the top corner of the netting at the far post. His second-period highlight goal helped the Avalanche to a 4-0 win against the Capitals.

“I had some time, and I had some ice to work with, so I wanted to attack,” MacKinnon said. “Make that player bite one way or the other, and managed to do that.”

Avalanche coach Jared Bednar had been impressed with the top line’s shift preceding the goal, and when the lines changed, MacKinnon “still looked like he was fresh,” Bednar said. The center stayed on the ice with Evan Rodrigues and Alex Newhook. Not that he needed anybody else.

The Avs (10-5-1) were outshot on the road for the second consecutive game but won their sixth in the last seven. Last season’s victory song, “Heat Waves” by Glass Animals, returned to the locker room speakers afterward.

“Our division’s good, obviously like every other year, and we need these points,” MacKinnon said. “We want to be in a good, solid position when we get healthy. We’re just looking to make the playoffs. And once we get healthy, we feel like we’re tough to beat and comfortable on the road, so if we don’t have home ice, it’s all good.”

Alexandar Georgiev saved 32 shots and kept Colorado competitive during a first period that looked eerily similar to the previous game, when a 48-15 shooting deficit was the largest of the seven-year Jared Bednar era. The Capitals were outshooting the Avalanche 14-4 during 5-on-5 play at first intermission, but Cale Makar’s 5-on-3 goal with 20 seconds remaining in the period undid the underwhelming start.

“Big one. We had some trouble getting shots through in the first period,” Bednar said. “… Sort of jump-started us for the second period.”

Makar’s one-timer goal, assisted by MacKinnon and Artturi Lehkonen, was his 199th career point, bringing him within one point of becoming the fastest defenseman in NHL history to reach 200.

He and MacKinnon were back to driving the bus after both had six-game point streaks end Thursday. Second-line forwards picked up the scoring slack in that unlikely win at Carolina. But in the nine games since then-leading scorer Valeri Nichushkin went out with an injury, either Makar, MacKinnon or Mikko Rantanen has scored or assisted on 70% (23 of 33) of the Avalanche’s goals.

The only outlier in Washington was a puck-luck goal for Andrew Cogliano, when Jacob MacDonald’s shot rebounded off his skate and past Kuemper for a 3-0 lead.

“It’s essential,” Bednar said when asked the importance of Makar and MacKinnon excelling. “Highly competitive guys that want to be difference-makers at all times, and I think it’s even more important when you’ve got a significant amount of injuries.”

Along with Makar’s power play goal, the Avs continued their penalty kill uptick. After allowing goals on nine of 20 attempts to start the season, they have only surrendered five goals in the last 36 (86.1%), climbing out of the league’s bottom five.

The Caps only managed one shot on their two power plays, including none during a 20-second stretch in which J.T. Compher was forced to defend space without his stick. The result was Colorado’s first shutout of the season.

“Feels awesome,” Georgiev said. “A lot of things have to go well, and the guys did a good job to weather the storm in the first and kept at it.”