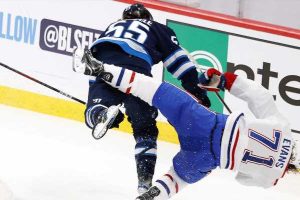 The Montreal Canadiens' 5-3 win over the Winnipeg Jets in Game 1 of their second-round series was overshadowed by a scary scene in the final minute.

Canadiens forward Jake Evans was taken off the ice at Winnipeg's Bell MTS Place on a stretcher after he sustained a brutal hit from Jets forward Mark Scheifele while scoring into an empty net with 57 seconds to go.

Evans remained motionless for a significant amount of time as a scrum formed near him following the hit. A linesman and Jets forward Nikolaj Ehlers made sure the scrum did not spill onto Evans. Eventually, cooler heads prevailed and trainers and medical personnel attended to Evans, placing him on a backboard and taking him out on a stretcher. Evans was moving his arms as he was taken off the ice.

A scary scene in Winnipeg as Jake Evans was stretchered off the ice after taking a hit from Mark Scheifele. pic.twitter.com/XFNlzcdy5I

Scheifele, the Jets' leading scorer in the regular season with 63 points in 56 games, received a five-minute major penalty and a game misconduct for the hit. The NHL's Department of Player Safety will almost certainly be taking a look at the play.

Mark Scheifele tossed for flattening Jake Evans after he scores on the empty net. pic.twitter.com/kE6nU3vDCD

The Canadiens had strong thoughts about the hit postgame.

"It was a dirty hit, but the league is going to take care of it," Canadiens defenseman Joel Edmundson said. "If (Scheifele) gets back in the series, we’re going to make his life miserable."

Said the Habs' Brendan Gallagher in an interview with Sportsnet: "We've all played this game long enough. (Scheifele) knows better than that. I know him. I don't want to comment too much. We were just told to let the league handle it. We trust that they will, but, I don't know.