Home » NHL » Kraken released: Top takeaways from the expansion draft, and what’s next

Kraken released: Top takeaways from the expansion draft, and what’s next 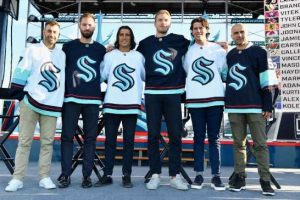 The Seattle Kraken selected their first group of players in the expansion draft on Wednesday night. Some arrived in person, the first to wear the newest NHL jerseys. Some had their names announced by flying fish and an octopus in the local aquarium, and some by Seattle SuperSonics legends Gary Payton and Shawn Kemp.

The Kraken selected one player from 30 NHL teams, with the Vegas Golden Knights exempt from the draft. The result was a roster that was young and well under the salary cap; and an approach to the draft that was in stark contrast with the way Vegas handled it in 2017.

Here are 10 takeaways from the Kraken expansion draft:

The Golden Knights and Kraken had the same rules for their respective expansion drafts. NHL teams could protect seven forwards, three defensemen and one goalie; or they could protect eight skaters and one goalie, which is what the Nashville Predators, Tampa Bay Lightning and Toronto Maple Leafs opted to do this time around.

Where the two teams diverge is space under the salary cap. The Golden Knights’ total cap hit from the 20 players they selected was $68.3 million, according to SinBin.net. The Kraken’s cap hit for their 20 players under contract was around $54 million.