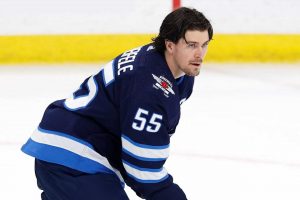 Scheifele will begin serving his four-game suspension for charging Friday night. He checked Evans hard in Game 1 of the second-round series after the Canadiens forward scored an empty-net goal late in Montreal's 5-3 win. Evans was taken off the ice on a stretcher.

Scheifele said the "bullying that (his parents and siblings have) gotten is completely unacceptable, the online, phone calls, it's pretty gross to see."

"My parents are the salt of the earth and for my parents to get hate like that and my younger brother and sister, it's awful. I can handle it. I'm a grown man. I've accepted that and I can be held accountable for that, but for my family to get that, it hurts me a lot."

Scheifele said he was sorry that Evans was hurt and he has reached out to the forward's Montreal teammates and was hoping for a quick recovery.

He said he was merely trying to stop Evans from scoring on the play. The NHL disagreed and suspended him, the first time Scheifele has received supplemental discipline in his career.

"I don't think I have more than fricking 20 hits a year," Scheifele said. "My intention is not to injure, not to make a hit. It's to prevent a goal. That's what my entire life is. My job is to keep pucks out of the net and score."

He thought the suspension was "excessive" but said he wouldn't appeal.

"I don't want to be a distraction to this team," he said. "It's Game 2 of the playoffs tonight. I'm going to accept the punishment."

The Jets trail the series 1-0, but Scheifele is confident the team is deep enough to overcome the absence of its regular-season scoring leader.

"I have full faith in my team that I'll be able to play a game again this year," he said.