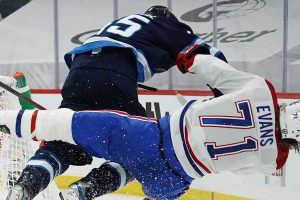 Winnipeg Jets forward Mark Scheifele has been suspendedfour games for his hit on the Montreal Canadiens’ Jake Evans in Game 1 of their first-round series that resulted in Evans leaving on a stretcher.

The NHL Department of Player Safety made the announcement Thursday night, keeping Scheifele out until at least Game 6 of this series. Should the Canadiens wrap up the series in four games, before Scheifele's suspension is through, the final game of his suspension will carry over to next regular season.

Scheifele skated with speed – nearly covering the length of the ice – and connected with a defenseless Evans, who did not see Scheifele coming after having just scored an empty-net goal on a wraparound to give Montreal a 5-3 lead.