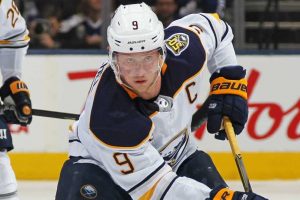 Tension has been brewing between Jack Eichel and the Sabres for some time. And now, it appears that the two sides are coming closer to a split.

As detailed by SportsNet’s Elliotte Friedman on WGR 550’s The Instigators, it’s not only Eichel who wants to leave the Sabres. Buffalo is ready to move on from Eichel as well.

“Teams are saying you’ve got an unhappy player who doesn’t want to come back,” Friedman said. “The Sabres, I really think at the end of the day, want to move on. They don’t want him back, they want to move on. And the teams are going to play Buffalo’s quote-unquote desperation at that.”

Certainly, that’s surprising. It’s one thing to be resigned that you have to trade a player, but wanting to move on from Eichel, a 24-year-old center who has scored at least 24 goals in all but one of his six seasons, is surprising.

NHL MOCK DRAFT: Who will the Sabres take at No. 1 overall?

Of course, Eichel is dealing with a bit of a neck injury that will potentially require surgery. But nonetheless, he’s a high-level, young talent who could thrive with a better supporting cast.

And as Friedman outlined, there are a lot of teams that seem to have an interest.

“I don’t know how many teams are in on Eichel. I think it’s several. I don’t think it’s insignificant,” Friedman said. “There are teams out there doing their due diligence on this.”

So, it seems that Buffalo will, at some point, be able to move Eichel. It’s just a question of when a deal might get done and what the Sabres might get in return. That may depend on whether Sabres GM Kevin Adams can create a bidding war for Eichel’s services.

“People are saying Kevin [Adams] wants to trade him, you’ve got to trade him,” Friedman said. “Adams has got to convince them and say not so fast. That’s what he’s gotta do. He has to create the marketplace.”

If Adams can do that, Eichel could fetch a king’s ransom on the trade market considering his talent level. That could make it worth their while, as it could turn Buffalo from a talent-deprived team to one full of promising young prospects.

Of course, Eichel’s injury could complicate that.

“What the Sabres are trying to do is say, ‘We’ve got [many] teams interested in Eichel, and we’re going to play you all against each other to try and drive up the [trade] value,'” Friedman said. “What teams are saying is, ‘Yes, you’ve got other teams [interested], but he’s got an injury. We don’t know about the [recovery] process.’ … They also say, ‘You guys aren’t dealing from a position of strength’ in negotiations.”

Whatever happens with Eichel, it does seem that he is firmly available on the trade market. Now, it’s just a matter of whether a team will pony up a big package for him or whether his injury will lead buyers to approach any deal with caution.