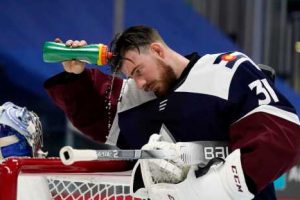 Like all honeymoons, it was over too soon. Paradise in a blink.

Darren Hersh has been coaching goaltenders, good ones, for 26 years. The five months with Philipp Grubauer were among the fastest of his career. Also, the sweetest.

“They were just doing regular warm-up drills and Grubi grabs a puck and starts passing back and forth with me between shots,” Hersh said of the Avalanche’s No. 1 net-minder, the last line of defense against the Vegas Golden Knights on Sunday in Game 4 of their second-round Stanley Cup Playoff series.

“I’ve never seen a goalie do that. That’s the kind of work ethic he had. You combine the technical stuff he has with the intangibles, it doesn’t really surprise me that he is where he is. What surprises me is, why in the world would Washington get rid of him?”

“In drills, when he would do his movement, he would be getting six inches farther than anybody else,” recalled Hersh, who was Grubauer’s goaltending coach with the ECHL’s Reading Royals at the start of the 2012-13 season.

“At this level, six inches makes all the difference. I always tell all the kids, ‘Grubi’s movement would put him there before the shot,’ even though he’s a normal-sized human being.”

Their paths first crossed nine winters ago, when Grubi was a 21-year-old German wunderkind in the Washington Capitals’ system, stuck with the Royals because of the NHL’s lockout.

He was too good for that level, even then, and everybody knew it: 26 games, a 19-5-1 record, a 2.30 goals against average and a Pentium chip between his ears — a kid seemingly two chess moves ahead at every turn.

“His movement, which was him just getting his positioning, was just that much better than everybody else. That’s the technical part,” Hersh said.

“But the intangible part is, the guy, every time he’s out on the ice … he was (always) doing something. The guys that I’ve coached that have made it that far, they’ve always taken their development upon themselves.”

“He was really working”

When you’re always trying to stay six inches ahead of anybody else, the race never stops.

It’s hard to tell how many of those 39 saves against Vegas during the Avs’ overtime win this past Wednesday — a 2021 season-high — we should credit to nature and how many to nurture. But maybe Bob Tetiva should be credited with an assist somewhere in the box score.

“I don’t think I can attribute his performance this year to just using Sense Arena,” said Tetiva, the founder and CEO of Sense Arena, a company whose virtual reality off-ice training platform is the cutting-edge tool of NHL cool. “He had a fantastic season last year, too.”

Ever since, the Vezina Trophy finalist has used the platform once a week, give or take, for roughly an hour per day.

Sense Arena posted a clip of Grubi in action, wearing a black VR headset that looked like a piece of oversized scuba gear, to YouTube last October. In it, the Avs’ net-minder fends off a series of virtual shots wearing only a black T-shirt and shorts.

“He was one of the first pro goalies who immediately wanted to try Sense Arena,” Tetiva said, “and that is what I love about the pros — they are always looking for ways to improve and find an edge to their performance.

“He is (darn) professional with fantastic goalie foundations. Seeing him making the saves in Sense Arena was like looking at a goaltending guide book. He was not playing around with it. He was really working.”

As with flight simulators, the VR tech allowed Grubi to practice real-world timing in real-world situations at real-world speeds at his leisure, without leaving the comforts of his home or hotel.

He’s one of a handful of NHL goalies who’ve embraced the platform, which is now utilized teamwide by the Knights, the Los Angeles Kings, the Arizona Coyotes and the New Jersey Devils.

“It’s perhaps more about the load management, and how to keep Philipp’s body in shape the whole season,” Tetiva said. “And that can be the role of our platform for the pros, too — you can make a workout at home or while traveling, not exposing your body to another number of butterflies.”

“He’s been rolling for quite some time”

Butterflies? Grubi? The ninja in white? Come on.

“He’s battled some of those injuries,” Avs coach Jared Bednar said. “But after, he’s put in the work and got himself healthy and strong. And you can see the confidence in him growing.

“It really started from Day 1 of training camp this year, and he’s continued it through this season. So now he’s been rolling for quite some time. He’s getting recognized with the Vezina nomination, and I think he’s earned it. And our team is extremely comfortable in front of him and we’re confident that he’s going to make the saves if we have breakdowns.

“We just don’t want to make as many as we did (last Wednesday) in the final two periods.”

The guys who make it this far don’t flinch. At anything.

As Grubi reminds fans, night after night, round after round, those extra six inches can go an awfully long way.

“Nothing fazes that guy,” Hersh said, laughing again. “He’s just as steady of a human as I’ve ever seen. Just stoic. Business. Just no fooling around. The pressure’s not going to get to him.

“All he’s doing now just seems to be a little bit more refined. I don’t see his game being that much different from what it was. He just plays his own game better now.”