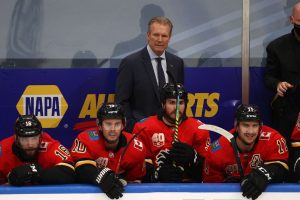 The Flames routed the Ottawa Senators 7-3 at home on Thursday night, but Ward’s fate was apparently sealed after going 11-11-2 to start the season. He was officially hired in the offseason after replacing Bill Peters on an interim basis last season.

Sutter has been a head coach for 18 seasons in the NHL with the Chicago Blackhawks, San Jose Sharks, Flames and Los Angeles Kings. Sutter led the Kings to the Stanley Cup in 2012 and 2014, playing a puck-possessing system that made Los Angeles one of the league’s top defensive teams.

Sutter’s deal with Calgary is for three years.

This is the fifth head coach hired by general manager Brad Treliving since he took over the Flames in 2014. Calgary is two points out of the final playoff spot in the West Division, although the Montreal Canadiens — who fired their head coach last week — have two games in hand.

Ward held court with the media after the win over Ottawa and appeared unaware of his fate.