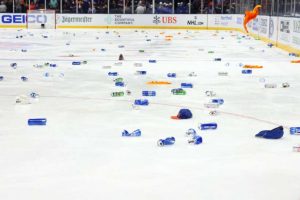 Whose tab is this on?

With the Islanders potentially playing their last game in historic, fan-favorite Long Island dump Nassau Coliseum on Wednesday night, Isles fans showed appreciation for the 3-2 overtime win over the Lightning the only way Long Islanders truly know how: Beer cans.

Soon after Anthony Beauvillier netted the overtime game-winner to even the series at 3 games apiece, Isles fans showered the sheet with hats, rally towels and (presumably empty) beer cans. Thankfully, no Isles players were hit with the celebratory cans.

While some analysts and media took offense to the sight, Isles players took it all in good fun.

“That building coming into overtime was smelling like cigarettes, and now it smells like beers,” Isles winger Beauvillier said following his overtime winner. “That place was going crazy. Everyone’s happy we’re going back to Tampa.”

It’s not the first headline to feature the hoppy nectar at Islanders games: Jets offensive lineman Dan Feeney has become a cult hero of Isles fans, with his mulleted, beer-swilling ways on display at several Isles playoff matchups this offseason.

The Islanders’ new turf, UBS Arena, is scheduled to open in time for the 2021-22 NHL season. Before the Isles head down the Southern State Parkway to get to their new digs, though, they take a plane ride south to Tampa for Game 7 on Friday night.

No hockey players were injured in the hurtling of the cans.