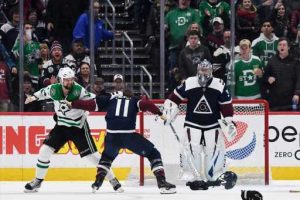 The St. Louis Blues got tougher with the free-agent addition of depth forward Kyle Clifford, the kind of player the Avalanche sorely lacks.

We previously knew the Avalanche’s toughest player, Matt Calvert, suffered a concussion early last season after inadvertently blocking a shot behind his right ear in Vancouver. We now know Calvert missed the entire seven-game, second-round playoff series against the Dallas Stars with a concussion because he disclosed that Thursday after being asked about the tinted visor he used in Wednesday’s season opener.

In the first period of that first game against St. Louis, the Blues’ Sammy Blais was whistled for elbowing when he illegally rocked new Avs defenseman Devon Toews, who immediately fell to the ice before being escorted to the locker room for concussion protocol. Luckily for the Avs, Toews returned to the ice and logged more than 22 minutes in the 4-1 loss.

But there was no push-back on Blais or the Blues. The Avs’ power-play goal was scored with Blais in the penalty box, but the Blues probably began thinking what I was at the time — Colorado isn’t tough enough. They don’t have a Kyle Clifford (83 career NHL fights, 842 penalty minutes). And they don’t have a Ryan Reaves (68, 910) of the Vegas Golden Knights.

They lack a deterrent — a guy who can lead his teammates into the fight. And in this Original Six-type season that has Colorado playing the Blues and Knights eight times apiece — plus possibly in a seven-game playoff series — team toughness is paramount.

“In the case of the Avalanche, you’re going to have some pretty contentious games with the Vegas Golden Knights and the St. Louis Blues, because they seem to be the clear top-three teams in that division,” NHL Network analyst E.J. Hradek told me. “And they’re going to see each other in the first two rounds of the playoffs, so there’s going to be even more meetings with those teams.”

Colorado used to be tougher. It lost some toughness by trading 6-foot-5, 235-pound defenseman Nikita Zadorov to Chicago in the offseason (although Zadorov was highly inconsistent in protecting his teammates) and replacing him with the 6-1, 190-pound Toews. The Avs became more mobile and more dangerous offensively with the indirect swap but what they lost could offset what they gained.

They lost a deterrent — a guy you didn’t want to tangle with.

If Toews is out of the lineup with a concussion from a hit that drew no response, those cheap shots will continue. The opponent is going to hit you where it hurts, where you’re most vulnerable.

Calvert, 5-11 and 186 pounds, isn’t afraid of anybody, but he’s probably been advised to avoid being hit in the head. Outside of J.T. Compher, the third-line center, there isn’t another forward on the bottom-size who has the natural nastiness that every team needs.

Here’s an idea: The Avs should unleash top-size power forwards Gabe Landeskog and Nazem Kadri. Yes, they want Landeskog and Kadri to score goals and make plays — not fight and potentially break a hand or an orbital bone.

But this highly talented team can’t have it both ways. It can’t forget about the blood-and-guts toughness every Stanley Cup winner must possess.