Home » NHL » Best of Stanley Cup Game 5: Cup is in the house as Avalanche are a win away

Best of Stanley Cup Game 5: Cup is in the house as Avalanche are a win away 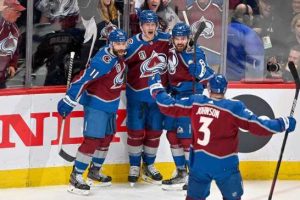 The Stanley Cup is in the building. The Colorado Avalanche lead the best-of-seven series with the Tampa Bay Lightning, 3-1. The Avs could close out the series and keep the Cup in the building in Friday’s Game 5.

Game 4, which ended in a 3-2 Colorado overtime win, did not come without controversy. Video replay appeared to show that Colorado had too many men on the ice when Nazem Kadri scored the game-winner. It looked like Kadri had made an improper line change seconds before Nathan MacKinnon made it back to the bench.

The call was not made. The official NHL response said the penalty is a judgment call and the goal stood.

Now, the two-time defending champ Lightning are on the ropes and the Avalanche are on the verge of winning their first Cup since 2001. Colorado coach Jared Bednar wants his team to feed off the nerves and emotions.

“You always hear about controlled emotion. I’m kind of the opposite with our team,” Bednar said on Friday. “Besides running around and getting out of our game plan, I want us to use our energy and nervous energy and emotion to go play the game with passion, play hard and stay on our toes and getting after it.”

How to bet Game 5

The Avalanche went with some stylish looks in front of neon lighting for their walk to the arena, while the Lightning looked bright and optimistic despite their deficit.

The Cup is rested and ready