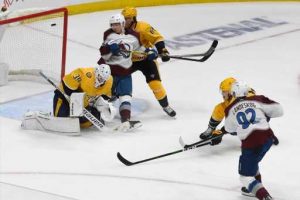 NASHVILLE — The Avalanche, thanks to captain Gabe Landeskog, reserve goalie Pavel Francouz and seemingly everyone else, remained perfect in first-round Stanley Cup playoff games over the last two seasons on Saturday.

Colorado scored on its first four power plays — two after losing starting goalie Darcy Kuemper to an eye injury — to smash the Nashville Predators 7-3 at Bridgestone Arena and take a commanding 3-0 lead in the first-round Western Conference playoff series.

“I liked their game. We were disciplined with the puck. Managed that well. We were competing,” Avs coach Jared Bednar said. “Hard-fought game — hard-fought game right from the start. We expected it to be. But I thought our team got to our game and stuck with it pretty consistently throughout and special teams, obviously, was a huge difference-maker.”

Game 4 is here on Monday.

“They’ve got their backs against the wall at home,” Landeskog said. “You never want to get swept at home and we want to try to end this thing and don’t give him any life.”

Landeskog led the way with two goals and four points, Francouz stopped 18-of-20 shots in relief duty and defenseman Cale Makar had three assists. Colorado led 2-0 on power-play goals from Artturi Lehknonen and Nathan MacKinnon and Landeskog and Nazem Kadri also scored on the man-advantage en route to a 5-3 lead after two periods.

The victory against the No. 8-seed Preds, however, could prove costly for the No. 1 Avs.

Kuemper left in the final minute of the first period with an eye injury. While on his knees protecting the net, he was poked in the face through his mask by Nashville forward Ryan Johansen, who was battling MacKinnon for position in front of the crease.

Kuemper was in obvious pain and tried to skate to the bench, but couldn’t find his way and fell to the ice. He was escorted off the ice and replaced Francouz with the Avs nursing a 2-1 lead. Kuemper did not return, but postgame, Bednar said he is doing well and could be available for Game 4.

“We’ll get him further evaluated. He’s got some swelling,” Bednar said. “But hopefully, he’ll be able to get back in the net.”

Nashville forced 2-2 and 3-3 ties before the Avs put two pucks behind rookie goalie Connor Ingram in a 39-second stretch late in the second period. Defenseman Devon Toews beat Ingram with a slap shot midway through the third period and Valeri Nichushkin added an empty-net goal.

The Avs, who swept the St. Louis Blues a year ago in the first round, improved to 7-0 in first-round games the past two seasons.

“We’re a pretty level-headed group,” Toews said. “This game is over now. So now we move on to the next one. Next one is the big one. It’s the hardest game, to knock a team out. They’re playing for their season now. So this next game is going to be huge.”

With the game tied 3-3 late in the second period, Landeskog used a wrist shot from the left circle for his second goal. Lehkonen made contact with Ingram in the crease but it appeared he was pushed by a defender toward the goalie.

The Preds challenged goaltender interference and lost that gamble, sending the Avs on the power play as Nashville was assessed a delay-of-game minor for the failed challenge. On the ensuing shift, just 39 seconds after Landeskog’s goal, Ingram tried to play the puck behind his net but saw Landeskog skating in on the forecheck from the right wing. The goalie threw the puck to the other wing where Kadri slapped it in for an unassisted power-play goal and a 5-3 lead.

“That’s exactly the risk you take challenging sometimes, and that’s what we did last game and we ended up getting a penalty on it,” Landeskog said. “So that was a big swing for sure. And we’re able to get a bounce on the power play and Naz cashes in. So definitely a big, big swing in the game.”

From the outset, Colorado weathered Nashville’s 10-minute storm before going on the power play and having Toews’ long slap shot carom off Lehkonen and behind Ingram at 10:45. Then, at 16:08, the Avs were again on the power play and MacKinnon swatted at a loose puck in the crease that sneaked past Ingram.

Former Avs forward Matt Duchene got Nashville within 2-1 by the end of the second period before Kuemper went down, and Eeli Tolvanen scored a power-play goal early in the second as the Preds forged a 2-2 tie.

Midway through the middle frame, the teams traded power-play goals in a 1:56 stretch — first by Landeskog (backhand from the crease) and then Preds defenseman Roman Josi (long slap shot).

Footnotes. The Avs used the same lineup as in Game 2. The scratches were forwards Alex Newhook and Andrew Cogliano (upper-body injury) and defensemen Jack Johnson, Kurtis MacDermid and Ryan Murray. … Colorado has a scheduled practice on Sunday but it could be optional with a morning skate available on Monday.