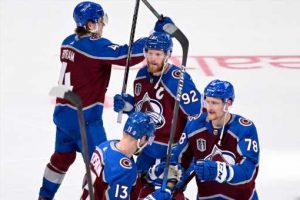 Avalanche coach Jared Bednar met with the media at Ball Arena on Thursday morning, an off-day for the players. The club is expected to practice on Friday ahead of Saturday’s Game 2 of the Stanley Cup Final against the Tampa Bay Lightning.

“We look at that game last night, we liked large portions of it, didn’t like portions of it,” Bednar said. “Some of the things … we can correct. Regardless of how Tampa plays, we have a certain identity that we need to play to be successful. We’ve learned that during the course of this season especially.

“And then for me, it’s just like managing those momentum swings and we’ve been breaking the game down into five-minute increments all year and it’s something that our guys talk about on the bench and they understand it and they recognize it that when the other team is making a push and we lose a five-minute segment of a period, that we have to bounce back and get it turned in the right direction. And we also talk about specific things that can help us do that.”

Avalanche star center Nathan MacKinnon had five shots and a plus-1 rating. His only point in Game 1 was an assist on Valeri Nichushkin’s goal that gave Colorado a 2-0 lead midway through the first period.

Bednar isn’t overly interested in trying to avoid MacKinnon and wingers Gabe Landeskog and Valeri Nishushkin going against the Cirelli line. The Avs have last change at home so Bednar has some say with the matchups at Ball Arena.

“I think it’s inevitable that he’s going to play time against Cirelli if that’s the matchup (Tampa Bay coach Jon Cooper) wants,” Bednar said of MacKinnon. “And I wanted to start our starters. You guys know Nate; he’s not afraid or intimidated to go against anybody. In fact, he embraces some of those matchups. There are some other matchups that I like equally as good or better. But certainly, I’m not going to interrupt the flow of our game to avoid something until I see that it’s not working.

“If it’s working and our team is comfortable with it, then we’ll use it a little bit and not run away from it. If I want Nate on in certain situations and they put out Cirelli, I’m going to put Nate out.”

MacKinnon is among the Avs trio of long-time veteran leaders, along with fellow alternate captain Mikko Rantanen and captain Gabe Landeskog. They each had a hand in Colorado’s goals for an early 2-0 lead and played on the same line at times.

“It’s huge. We talk about it all the time, your best players have to sort of lead the charge,” Bednar said. “Obviously, everyone’s excited for the start of the game. And for those guys to go out and have the start they did and – you know, it’s kind of why I bounced Mikko onto that line a little bit. too, early in the game and sometimes after, just to watch those guys play together and see what they can accomplish.

“I thought they had a great night. All three of those guys played well. They’ve been together and apart. But we certainly need that. You need it moving forward. Those guys have to be a difference-maker in the series.”