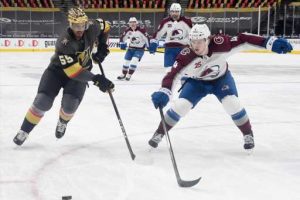 Avalanche defenseman Bo Byram is still a teenager, but in a thrilling 3-2 victory on Tuesday night against the division-leading Knights, he proved that age is just a number.

Byram, 19, in his 10th career NHL game, set a new personal-best for ice time — 25:03 — as the second leader among all Avs players behind fellow defenseman Devon Toews.

On Tuesday, Colorado (8-4-1) and Vegas (10-3-1) were tied with 1 minute and 46 seconds left in regulation when Nazem Kadri won a faceoff in the Avs’ offensive zone. Byram received the puck at the blue line, fired an entry pass toward net, and the chaos that followed resulted in a Kadri game-winner — assisted by Byram.

“He’s learning on the fly,” Kadri said. “As a young kid, this isn’t an easy situation to be put in. Playing a team like Vegas multiple times in a row, getting the ice time that he’s gotten, and his age is obviously a factor. The more experience he gets, the better of a player he’s going to be. He knows what he’s capable of out there.”

Avalanche forward Brandon Saad added: “You can just see his confidence growing every game with holding on to pucks and making plays. He obviously has the talent, but you can just see him, that he wants it, he has the hunger.”

Byram is starting to fulfill lofty expectations as the No. 4 overall pick in the 2019 NHL Draft, however, his 2021 rookie ascension is mostly due to nagging Colorado injuries. The Avs were without arguably their top-three defensemen — Sam Girard (COVID-19 protocol), Erik Johnson (upper body/injured reserve) and Cale Makar (upper body/day-to-day) — in Tuesday’s victory against Vegas.

“With the guys that we have out of the lineup, these young guys are getting tested,” Bednar said. “There is no hiding them out there. They’re playing against the other teams’ top lines.”

Colorado now embraces a three-day break before the team once again plays the Knights, outdoors on Saturday at Lake Tahoe, as part of the NHL’s Stadium Series. That extra rest in a tightened season might allow for the return of Girard and Makar to the ice. But growing confidence in Byram has certainly eased depth concerns in Colorado’s quest for the Cup.

“When we have our full lineup in, our D find a way to deliver pucks on time to our forwards, and we get a little flow to our game,” Bednar said. “It’s not as clean over the last couple of games, but it’s to be expected. Sometimes, we’re just in survival mode out there and finding a way to stay afloat.”