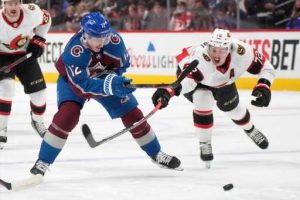 Goalie Darcy Kuemper had a .935 save percentage in his last six starts and the streaking Avalanche was supposed to reign supreme in this one — a home game against a 4-11-1 team that had not played in the last eight days because of a COVID outbreak.

But the Ottawa Senators surprised a lot of people — particularly the big crowd at Ball Arena that saw Colorado take the lead 50 seconds into the game. The Avs had enough scoring but not enough Kuemper, who allowed five goals on the first 14 shots he faced in what turned into a track meet.

Ultimately, Avs rookie forward Alex Newhook was the difference, scoring with 1:33 remaining in regulation for the go-ahead goal in a 7-5 victory that extended Colorado’s winning streak to five games — each played without injured top-line center Nathan MacKinnon.

Newhook cashed in on a rebound off a shot by linemate Logan O’Connor for the Avs’ third goal of the period.

Avs center Nazem Kadri, who had three assists to extend his career-best points streak to nine games, added an empty-net goal in the final minute.

“A little bit sloppy, for sure. We gave up five goals,” Kadri said “They were an opportunistic team and cashed in on really the only opportunities they had.”

The teams combined for four goals in the first 9:08 of the third period, with both teams scoring twice. Josh Norris gave Ottawa a 4-3 lead with a power-play goal at 1:03 and the Sens’ Zach Sanford completed his hat trick for a 5-4 advantage at 5:00. The Avs, who never trailed until Norris scored, played successful catch-up hockey with goals from defenseman Cale Makar at 2:45 and center Mikko Rantanen at 9:08.

“Every single team in the league can beat each other any night. We had a few unlucky balances that were going in early and then for us as a team, it was just a lot of inconsistencies,” said Makar, who scored twice in the game and five times in the last three games. “We started the game (strong) and then kind of dipped and then went back up. Overall, we just stuck with it.”

Colorado produced 29 of 40 shots, but it was tied 3-3 after two periods. The Avs never trailed but couldn’t skate away from the Senators, who had their three previous games postponed.

Tied 2-2 late in Colorado’s dominating second period, defenseman Devon Toews tapped in a diagonal feed from Kadri for the Avs’ third lead of the game. But Ottawa answered, this time less than three minutes later, when Sanford beat Kuemper with a wrist shot from the left circle.

Kuemper had just returned to the ice after requiring a new skate blade. He did not face a shot in the period until Sanford scored at 16:33.

Winger Valeri Nichushkin scored the Avs’ first goal in the first minute of the game but the Sens answered at 12:53 on Sanford’s first tally. Makar and Ottawa blue-liner Artem Zub traded goals at 13:11 and 19:14, respectively, and the teams were tied 2-2 after 20 minutes.