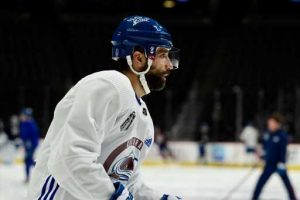 Avalanche forward Andrew Cogliano was a full participant in Saturday’s morning skate, meaning the 35-year-old veteran might return to the lineup for Game 2 of the Stanley Cup Final against the Tampa Bay Lightning.

Cogliano, who has a team-high 111 games of NHL playoff experience, was among four acquisitions ahead of the NHL trade deadline in March. He’s become a valuable fourth-line winger and penalty killer because of his speed and forechecking abilities. He sustained a hand injury late in Game 4 of the Western Conference finals at Edmonton and underwent surgery soon after.

Second-line center Nazem Kadri again skated before the team on Saturday but won’t likely play in Game 2. He underwent thumb surgery in Denver on July 6 when Cogliano went down in Game 4. Kadri broke his thumb in Game 3 against the Oilers.

Kadri is expected to travel with the Avs to Tampa on Sunday and possibly play in Games 3 and 4 on Monday and Wednesday, respectively.

Top prospects. Shane Wright was among four NHL top prospects to attend Saturday’s morning skate and visit with Avalanche players. Wright, 18, is expected to be selected No. 1 overall in next month’s draft in Montreal. He had 94 points (32 goals) in 63 games a rookie for Kingston of the Ontario Hockey League.