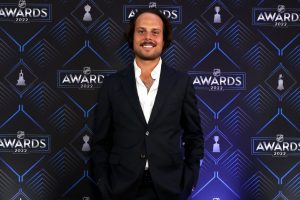 TAMPA, Fla. — Toronto Maple Leafs star Auston Matthews is one of the most fashion-forward athletes in sports and certainly in hockey. At Tuesday night’s NHL Awards, Matthews said he kept his look “casual,” which for him still meant being draped in Gucci.

He accepted the awards sans tie and with an open shirt.

“They said we could go somewhat casual. I don’t love wearing a tie, if I’m being honest with you. It’s hot,” said Matthews, noting the Florida climate.

“Trying to take it a little casual tonight,” he added. “Let the chest breathe a little bit. It’s sticky out there.”

Matthews wore head-to-toe Gucci, although he did get a question from Canadian media confused about his jacket.

Were those maple leaves?

For Matthews, he looked good on a night when he won two awards.

“It’s nice. I’m not going to lie to you, it feels really good. It’s special to have my family here with me. There are a lot of great players in that room,” he said.