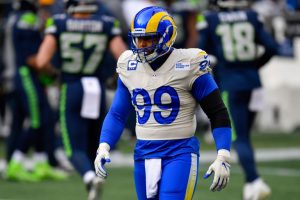 NFL Network’s Mike Garafolo reported Sunday on NFL GameDay Morning that initial X-rays on Donald’s injured ribs came back negative for a break, per sources informed of the situation. The defensive tackle will undergo an MRI today to determine the extent of the injury.

Garafolo added that Donald could have re-entered the game late if needed in the 30-20 win over Seattle on Saturday.

Donald exited the tilt early in the third quarter after slinging Russell Wilson to the ground. The two-time Defensive Player of the Year hurt his ribs rolling over Wilson and appeared to have trouble breathing on the sideline. Donald took multiple trips to the locker room. He ended the game on the sideline but didn’t re-enter the match as the Rams pulled away with the win.

Coach Sean McVay told Garafolo he’s “hopeful” Donald will be ready for the Divisional Round.

“This guy is an absolute machine,” he said. “Never bet against AD.”

The Rams await the outcome of today’s New Orleans Saints-Chicago Bears bout to ascertain who they will face next weekend. If the Saints win, L.A. will face the No. 1 seeded Green Bay Packers. If the Bears pull the upset, the Rams will fly to Tampa to face ﻿Tom Brady﻿ and the Buccaneers.