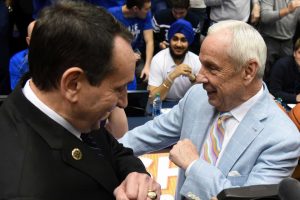 First Roy Williams. Then Mike Krzyzewski. Within the past two months, two of the biggest names in college basketball — two rivals with resumes dripping with success dating to the 1980s — have decided to retire from coaching, with Williams' decision effective immediately and Krzyzewski's career concluding after this coming season.

For decades, figures such as Williams and Krzyzewski have defined men's college basketball through an overpowering cult of personality. Their departures, and the similar decisions that will soon be made by several other longtime head coaches, come as college basketball's annual focus has shifted away from coaches and onto those one-and-done players whose celebrity status is established before stepping onto campus.

A massive changing of the guard is coming to college coaching, with Williams and Krzyzewski at the front of a series of retirements that will change the profession, the sport and the annual hunt for the national championship.

With several other contemporaries already contemplating retirement or seemingly at the point where retirement is a heavy possibility, men's basketball is on the verge of losing many of the biggest names in coaching at some the nation's most successful programs.

Syracuse coach Jim Boeheim, 76, announced in 2015 he would retire after the 2018 season, only to step back from that decision after longtime assistant and head-coach-in-waiting Mike Hopkins left for the open position at Washington.

OPINION: Who will replace Coach K at Duke?

END OF AN ERA: Mike Krzyzewski to step down after upcoming season: report

Rick Pitino, 68, returned to college coaching this past season at Iona, leading the Gaels into the first round of the men's NCAA Tournament.

Michigan State coach Tom Izzo, 66, is the oldest coach in the Big Ten. Izzo has led the Spartans to one national championship and another seven trips to the Final Four.

Kentucky coach John Calipari, 62, just experienced his first losing season as a head coach since his first year at Massachusetts in 1989.

Alone, these six coaches have combined for 26 Final Four appearances and nine national championships since 2000. While other programs have risen and fallen from powerhouse status, one constant for the past two decades has been this: Teams led by these coaches would be at the front of the chase for the national championship.

Across the next several years, these projected coaching changes will decide in what form these programs exist outside of the head coaches almost singularly responsible for their current status as national powers. In financial commitment and support, the framework is there for every program to maintain a place among the nation's elite even as the keys are set to be handed to unproven replacements — first-time head coach Hubert Davis will take over for Williams at North Carolina, while 33-year-old Duke assistant Scheyer is seen as Krzyzewski's likely successor.

Scheyer in particular would be taking on one of the most daunting challenges in the history of college coaching, with historic comparisons only to Bear Bryant's replacement at Alabama and John Wooden's replacement at UCLA.

With the Blue Devils and others, the near future will answer an era-defining question: Have the biggest names in college coaching constructed programs built to last beyond their own expiration date? If not, the upcoming changing of the guard promises to do more than shift the spotlight to the next generation of head coaches — it may change the established landscape of which programs dominate the sport.