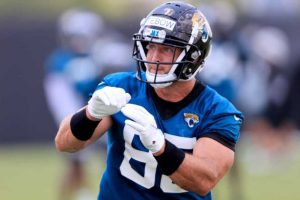 NFL fans are finally going to see one of the biggest questions of the offseason answered: Will Jacksonville’s Tim Tebow experiment work?

Tebow is returning to the NFL after six years away from the sport and played his first preseason game Saturday night. His college coach-turned-Jaguars coach, Urban Meyer, is giving the converted quarterback a chance to fight for a spot at the tight end position during the 2021 NFL preseason.

Tebow, 34, last played during the 2015 preseason with the Eagles, at quarterback. Then, he spent five years in the New York Mets organization playing minor league baseball. He hit .223 with 18 homers across three minor league seasons.

Needless to say, fans are wondering if Tebow can earn a roster spot after both switching positions and spending so much time away from football. A true answer will come on Aug. 31, the deadline for NFL teams to cut their 90-man rosters down to 53. Until then, fans will be left to ruminate on Tebow’s chances of making the roster.

Luckily, Meyer has at least weighed in on his performance to date. So too have some other members of the Jaguars staff:

Will Tim Tebow make the Jaguars?

Meyer has largely been noncommittal when addressing Tebow’s chances of making the Jaguars’ 53-man roster. The first time he did so was in an early June interview on the Rich Eisen Show. During that appearance, Meyer acknowledged that making the team wouldn’t necessarily be easy for Tebow, though he spoke well of his work ethic.

“What’s the percentage of making the team? We don’t know, this is uncharted water, this is gonna be very difficult, but he’s been doing great,” Meyer told Eisen. “He’s been doing great in practice, he’s learning the offense as you can imagine. He’s working as hard as anybody. I see a good camaraderie amongst the team and Tim, and it’s been good so far.”

Later that month, when asked point-blank about Tebow’s roster chances by USA Today’s Mackenzie Salmon, Meyer largely dodged the question. He called Tebow “one of 90” on the roster and implied he wasn’t thinking about the 53-man roster much yet.

“The last thing you just said is the tough part — that’s 53. That’s new to me, that’s the reality of the NFL, that you have 90 players. So to me, he’s one of 90, he’s a guy that’s … what’s the difference between him and the other 40 guys trying to make the team? To me, it’s all the same. This is their livelihood, this is their job, this is the way they make a living. And the reality is that a good percentage of your roster is gonna get cut or get transitioned out of here, which, to me, that’s completely new. In college, you’ve got your 85, 90 guys, you fit ’em in, you put the puzzle together. It’s much different here.”

Since then, Meyer has largely been mum about Tebow’s roster chances. But at least one unnamed member of the Jaguars’ staff believes that Tebow has “a real shot” to make the 53-man squad.

“I think he has a real shot to make the team.” said a member of the Jaguars staff in late July, per WalterFootball.com’s Charlie Campbell. “It isn’t a gimmick or a favor. I think he could be a core special teamer.”

How has Tim Tebow looked in training camp?

As expected, Tebow had a long way to go when he started working as a tight end with the Jaguars in May. Meyer called Tebow’s first practice with the Jaguars “awkward,” but also noted Tebow had “improved” in the early stages of learning his new role.

“Oh well, I wouldn’t say weird — awkward maybe, the first practice,” Meyer said. ”But it’s one of 90, trying to make the team. He has improved, it’s all new for him, but Tyler Bowen is doing a good job with our tight ends as a whole.”

Meyer continued to laud Tebow’s improvement during June OTAs. Meyer noted that his former quarterback at Florida had “done a decent job” through practices two weeks after Tebow first saw the field.

“Oh, Tim has done a decent job. We all know this is a new position for him,” Meyer said. “He’s a great teammate. In the locker room, I can see everybody getting along, we have good chemistry on our team. But he’s picked it up decently.”

Is that a ringing endorsement? No; but certainly, it sounds like Meyer believes that Tebow has a chance to continue improving and maybe crack the Jaguars’ tight end depth chart.

More recently, Meyer complimented Tebow’s hands at the very end of July. That said, he also noted that Tebow has to work on one problem spot: catching the ball with his body instead of grabbing it out in front of him.

“He has good hands. In his drill work, he’s great, but when you get in a competitive moment, just (because of his) lack of experience he wants to body the ball,” Meyer said, per CBS Sports. “When you get to a point where two people are going after it, you have to go get the ball. He is fighting through that a little bit, but he has the skill set to catch the ball.”

Of course, that was to be expected of a player operating in a new position. But as Jaguars offensive coordinator Brian Schottenheimer explained to reporters, Tebow’s previous experience as a quarterback has been beneficial during his transition.

“You see the football mind, you see how he sees the game from the quarterback’s point of view,” Schottenheimer said after practice on Sunday, per ProFootballTalk. “There was a play a couple days ago in the red zone where I think it was C.J. (Beathard) broke out and scrambled left and the first guy that saw it was Tim and we threw him a touchdown pass. Why is that? Well, he has played the position — he has stood back there and seen, ‘Oh well he is moving this direction, I have to go with him.’ It is going to be fun to watch him compete in the preseason as well.”

Schottenheimer also discussed Tebow’s quest to learn the nuances of his new position.

“He knows there are things he does not know,” Schottenheimer said. “He asks unbelievable questions, you know, he really does.”

How Tim Tebow performed in his first preseason game

Tebow’s first preseason game as a tight end was forgettable. He was targeted just once in 16 offensive snaps and didn’t record a catch. He didn’t play on special teams.

Tebow first saw the field with less than 20 seconds remaining in the first half. He had a chance to make a catch over the middle of the field, but he and Tavon Austin ended up in the same spot on the play. Austin managed to snag the throw, which didn’t count as an official target for Tebow.

After halftime, Tebow didn’t see the field until a couple of plays to close the third quarter. Jacksonville gave him some red-zone snaps where he was used as a blocker. It didn’t go well.

Tebow’s first attempt at a block went viral, as he crashed into a Browns defender only to spin off the side of him and fall to the ground. His poor block didn’t have an impact on Dare Ogunbowale’s 6-yard run, but it was ugly, nonetheless.

That said, Tebow’s attempt at a block on the next play was arguably worse. His assignment blew right by him to stuff Ogunbowale for a loss.

That was it from Tebow until the final four minutes of the game. During that stretch, his lone target glanced off his hand; it was nearly intercepted. The ball was tipped at the line of scrimmage, however, so the incompletion wasn’t entirely Tebow’s fault.

The good news for Tebow as he fights for a roster spot is that the Jaguars’ tight end room is light on NFL-level talent and experience. In fact, the six tight ends on their roster combined have just 101 catches at the NFL level.

It’s worth noting that Farrell is a rookie fifth-round pick out of Ohio State, but he only had 34 total catches during his four college seasons. So, it remains possible that if Tebow shows enough on special teams, he could make the roster.

For now, though, Tebow finds himself behind the two veterans — Manhertz and O’Shaughnessy — as well as Farrell on the Jaguars’ depth chart. He’s listed as fourth-string on the depth chart along with Ellefson and Davis.

Of course, the Jaguars’ preseason Week 1 depth chart does list Gardner Minshew and Trevor Lawrence as co-starters while Travis Etienne is the third-string running back, so it’s important not to read into this too much just yet.