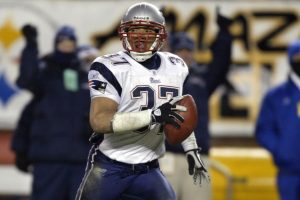 Who deserves the Hall call?

Yup, it’s that time of year again, with the Pro Football Hall of Fame due to announce its modern-era semifinalists for the upcoming class on Wednesday, Nov. 24 at 1 p.m. ET on NFL Network. And I can’t help but think of one player who reached the semifinal stage for the first time last year, but fell short of the bronze bust. A two-time Super Bowl champ who absolutely deserves a gold jacket.

I watched Rodney evolve as a player from afar over the course of nearly a decade. Honing his skills on the San Diego Chargers, Rodney developed from a special teams player to a starting safety to one of the best defensive backs in the NFL. Meanwhile, I was working my way up the ranks on four other AFC teams, serving as a pro scout, pro director and eventually vice president of player personnel.

Following his ninth season with the Chargers, Rodney was released in February of 2003. I was with the New England Patriots at that time, and we jumped at the opportunity to sign the two-time Pro Bowler. He remained a Patriot until his retirement following the 2008 season.

As a player, Rodney was smart and instinctive with a very good combination of size (6-foot-1, 220 pounds), strength and speed, both pure and playing speed. His study habits, vision and instincts allowed him to play faster than others who were more naturally gifted. However, his ability to communicate with teammates — in the locker room and off the field — set him apart.

I understand the complexities that come with every decision in this business, and I pride myself on being able to compartmentalize and make the player evaluation about performance, not emotion. Yes, Rodney is one of our former players, a former co-worker and a dear friend, but trust me when I say that I’m not making his case for the Hall of Fame based on my own biases. His career production falls in line with a number of Hall of Famers.

To start, Rodney and linebacker Ray Lewis (HOF Class of 2018) are the only players in NFL history with at least 30 interceptions and 30 sacks, a feat Rodney accomplished first. But for more of an apples-to-apples comparison, let’s look at how Rodney’s career stacks up against another safety from the era who is already in the Hall of Fame: John Lynch, Class of 2021.

Let me first say that Lynch deserves his spot in Canton. He was a phenomenal safety who played an instrumental role in bringing Tampa Bay its first Super Bowl. But if John is in, Rodney should be, too. The numbers don’t lie.

The same holds true for tackles, forced fumbles and passes defenses, though those stats weren’t being verified until the early 2000s, per Elias. From 2000 through ’07 (Lynch retired after the ’07 campaign), Harrison outpaced Lynch in all three categories despite playing in 21 fewer games in that span.

Lynch earned first-team All-Pro and Pro Bowl honors that season. Harrison got neither.

Lynch made the Pro Bowl after that ’04 campaign. Harrison did not.

Lastly, let’s take a look at their postseason performances. Harrison’s statistical edge over Lynch was even more pronounced in the playoffs. Harrison is the last player to have multiple interceptions in a single Super Bowl, accomplishing the feat in the Patriots’ 24-21 triumph over the Eagles in February of 2005. (Ironically, two of Lynch’s Bucs teammates, Dexter Jackson and Dwight Smith, did so two Super Bowls prior.) Harrison won two championships with the Patriots, while Lynch notched one with the Bucs.

When comparing these two careers, how does one player get enshrined while the other has only made the semifinalist list once? Once!

Rodney was — and still is — a passionate man, and he played that way. There were always a lot of opinions about him from coaches, scouts, his peers around the league, media members and fans. And look, I know Rodney wasn’t perfect, and he will be the first to admit he took it too far at times. He was fined and suspended multiple times for his on-field play during his 15-year career, and was also suspended for four games in the 2007 season after knowingly using human growth hormone (HGH), a banned substance by the NFL. An ordeal he later called “a black cloud over my career.”

In my opinion, if Rodney Harrison has been kept out of the Hall of Fame due to the suspensions and fines, it’s a lazy argument. Unfortunately, there are other football immortals with worse marks against them.

The Hall of Fame is home to the best football players in our game’s history. Rodney was a champion in every sense of the word and set the standard at his position. It’s simple. His body of work merits recognition of the highest level. He deserves the Hall call.