Home » NFL » Why Jim Harbaugh and Michigan recommitted now, and what comes next

Why Jim Harbaugh and Michigan recommitted now, and what comes next 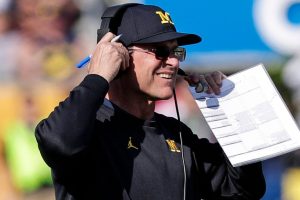 Jim Harbaugh isn’t leaving Michigan. At least not yet.

Despite Harbaugh’s worst season as a head coach at any level, he signed an extension that runs through the 2025 season, athletic director Warde Manuel announced Friday. Harbaugh had one year left on his initial contract with his alma mater, which paid the coach slightly over $8 million in 2020.

This season, the Wolverines finished at 2-4 after their last three games were canceled. COVID-19 concerns nixed Michigan’s Dec. 5 game against Maryland, then a Dec. 12 game against Ohio State, which opened as a 30-point favorite. As a result, Harbaugh’s record against Ohio State remains 0-5, as Michigan last won The Game in 2011, when he was coaching the San Francisco 49ers. On Dec. 15, the team called off a Champions Week game at Iowa.

Harbaugh’s future at Michigan has been a hot topic for months, especially with so little job security beyond 2020. Now Michigan has committed to him, at least for a little longer, despite the team’s poor play.

Here’s a look at why Michigan went this route, what it really means and how Harbaugh can engineer a turnaround in 2021.