Home » NFL » Why did the Panthers release Cam Newton? Looking back on Carolina’s decision to cut ties with franchise QB

Why did the Panthers release Cam Newton? Looking back on Carolina’s decision to cut ties with franchise QB 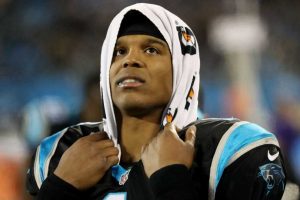 By all accounts, Cam Newton is the largest figure in Panthers’ franchise history.

He was the franchise’s first-ever first overall pick, and he immediately turned the Panthers’ organization around. Coming in on the heels of a 2-14 campaign, where Carolina was outscored by 212 points by opponents, the new Newton-led offense looked different.

Not once while Newton was the quarterback did the offense score fewer than 330 points in a season — the Panthers scored more than 330 just once in the previous five seasons. Newton took them to the playoffs four times, including a Super Bowl, single-handedly doubling the amount of NFC Championships and playoff appearances the franchise had. He was the only NFL MVP in franchise history, and when he left Carolina, he was the franchise leader in passing touchdowns, rushing touchdowns and passing yards.

Which all of course begs the question: why was he released in the first place?

As Newton prepares to make his first start back in Carolina since 2019, Sporting News is taking a look back at his release.

Why did the Panthers release Cam Newton?

When the Panthers brought Newton back, head coach Matt Rhule was open about the decision to cut the longtime franchise quarterback in 2020.

“I won’t go into specifics of our conversation but Cam Newton is a pro. We made a football decision at the time based on his health. We weren’t sure what his health was. We had to kind of make a decision at the time and Cam understands that. He understands that these are football decisions and football-based evaluations that you have to make. There wasn’t anything but an amicable conversation,” Rhule said, according to All Panthers. “At the time, we weren’t sure if he was healthy. Anytime you look back on things you always say I wish I could have done this a little differently but there was nothing but good feelings in that conversation.”

To further understand what led to the separation, it’s worth looking back at his time in Charlotte since he was drafted first overall in 2011.

Newton’s breakout MVP and NFC Championship-winning season was one NFL fans could certainly see coming. While the interceptions and low completion percentage showed concerns with accuracy, Newton’s dual-threat ability had defied expectations previously set on mobile quarterbacks and showed glimpses of a potential few in the NFL had reached.

But after the 15-1 season, Newton struggled. He finished the 2016 season with a career-low 52.9 completion percentage, with 19 passing touchdowns, 3,509 passing yards, 14 interceptions, 90 carries, 359 rushing yards and five rushing touchdowns. He improved his play in 2017 and in 2018, he put together the best individual season since 2015 — finishing with a career-best 67.9 completion percentage — but the team still limped to a 6-8 finish.

However, there were signs toward the end of the 2018 season that struggles and injuries could follow. In Weeks 10 through 15, Newton had nine passing touchdowns and nine interceptions, with 1,502 passing yards. He also rushed less, as he attempted just 28 carries for 146 yards with no scores during those six games. After Week 15, he was revealed to have been dealing with a shoulder injury, and missed the remaining two games of the season before undergoing shoulder surgery in the offseason.

Newton appeared in just two games in 2019 before he was placed on IR for a Lisfranc fracture. His last appearance in a Panther uniform came in Week 2 on Sept. 12, 2019.

At that point, Newton, who was 30 years old, had shown signs of both regression and potential injury woes. As a quarterback who was dangerous in part for his legs, Newton was understandably viewed as a potentially risky bet.

Newton was about to enter the final year of his five-year extension he had signed in 2015 before his MVP campaign, and while he wanted another extension to remain in Carolina, the organization was clearly not enthralled with the idea.

But it wasn’t just the injury issues and lack of consistency. Carolina was a franchise in transition. David Tepper bought the team in 2018 and was overhauling the organization. Head coach Ron Rivera was fired before the end of the 2019 campaign, and in January, former Baylor coach Matt Rhule was brought in to coach the team. Rhule brought in new coaches, including former LSU passing game coordinator Joe Brady, to shape up the offense.

The Panthers attempted to trade Newton to net some form of a return for the franchise quarterback, but the free agent market was loaded with quarterbacks, including Tom Brady, which ultimately eliminated several potential suitors for a trade. The Panthers announced on March 24, 2020, that Newton would be released. The next day, they announced they had brought in Teddy Bridgewater.

“Cam has meant a lot to this organization and the Carolinas,” general manager Marty Hurney said in a statement. “Everyone saw his performances on the field. I had the privilege of seeing how hard he worked off the field, and his commitment to this team when no one was watching. He’s the ultimate competitor and it physically hurts him to lose. He willed this team to victory on many occasions and will always be considered one of the greatest players in the history of this franchise. His contributions to the team, this community and the game of football will leave a lasting impact on our organization.”