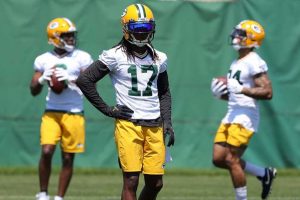 The Packers reigning MVP quarterback was a no-show during the first day of Green Bay mandatory minicamp on Tuesday, the latest chapter penned in an ongoing feud between Rodgers and the organization this offseason.

While Rodgers has been steadfast in his reported desire to leave Lambeau, there’s no end in sight between both sides. Some reports suggest the gap might be bridged, but until then, it’s still a gap.

Rodgers’ absence at camp was noticeable: Jordan Love, Green Bay’s 2020 first-round pick and heir apparent to Rodgers, took the snaps during the three-day camp, and his showing was less-than stellar.

Packers head coach Matt LaFleur and other Green Bay stars weighed in on the situation unfurling:

Speaking after the team’s June 8 practice, the Packers coach took a little bit of a harder stance on Rodgers’ absence.

“You’d love everybody to be here,” LaFleur said. “It is what it is, man, and we’ll focus and we’ll control and work on the guys that are here and try to help them become the best to their ability and coach the heck out of them. …

“I’m not gonna get into my conversations with Aaron and the communication,”  LaFleur said. “I think, you know, I’m naturally optimistic. But, you know, again, we’ll take it day by day and do whatever we can to help remedy the situation.”

There’s arguably no greater beneficiaries to Rodgers’ talents than his wide receivers. That’s why, in a supposed move of solidarity, the corps didn’t show up for voluntary workouts earlier in the offseason.

Adams, though, wasn’t going to miss out on paychecks heading towards the season, and made it known that he misses Rodgers’ presence at camp:

“I’ve got his back through everything so he knows that at the end of the day, if there’s ever a wonder if he’s lost a teammate or something because of all that’s come out, he knows where I stand,” Adams said.  “I’ll stand on the f—ing mountain and scream on the mountaintop that I’ve got his back.”

Bakhtiari, one of Rodgers’ closest confidants on the Packers, also chimed in after Rodgers was absent at the opening of minicamp.

“For me, I care about Aaron Rodgers from a friend perspective,” Bakhtiari said. “Whatever he wants to do, whatever the situation that comes out, I will never hold any grudge against him. That is my friend. That is someone that I have appreciated, and he has done a lot for this organization and a lot for me as an individual.

“Now, as a teammate I would be idiotic to say that I don’t want the MVP back. He’s the MVP of the league last year. He’s done amazing things from the quarterback perspective, our quarterback position, but not only for the franchise. So absolutely.”