When are the College Football Playoff rankings released? Time, channel for fourth CFP selection show in 2021 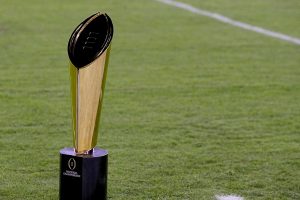 A wild and wonderful week of college football should result in a wild and not-so-wonderful shakeup in the latest College Football Playoff rankings on Tuesday.

Two top-10 teams lost on Saturday, which will undoubtedly affect the selection committee’s latest top 25. Coincidentally, those losses also solved two of the committee’s most looming problems: Where to rank Michigan State, and where to rank Oregon.

The committee received considerable flack in recent weeks for ranking the Spartans at No. 7, one spot behind No. 6 Michigan, whom they had beaten head to head earlier in the year. The committee certainly shouldn’t feel validated in that decision after Michigan State’s 56-7 loss to No. 4 Ohio State, but at least it will no longer have to explain that head-scratching choice again.

The other problem solved is Oregon’s place in the CFP rankings. The No. 3 Ducks ranked ahead of Ohio State in each of the previous three polls, but it was getting increasingly obvious that Ohio State was the better team, despite Oregon’s head-to-head victory over the Buckeyes in Week 2. With Oregon’s 38-7 loss to No. 23 Utah, the committee no longer needs to worry about where those teams rank in relation to each other.

The next pressing question the committee faces is whether to place Ohio State ahead of Alabama in the No. 2 position in the latest polls. The Crimson Tide took No. 21 Arkansas’ best shot, beating the Razorbacks 42-35 in Tuscaloosa. That decision ultimately will be nothing more than a talking point, as Alabama must beat No. 1 Georgia in the SEC championship game to make the playoff. A win there would likely make the Crimson Tide the No. 1 overall seed; a loss should eliminate them from contention.

Only two weeks remain for teams to make their playoff arguments to the committee. With that, Sporting News breaks down how to watch the fourth set of rankings:

What time are the College Football Playoff rankings released?

The College Football Playoff committee will unveil its fourth set of rankings for the 2021 season at 7 p.m. ET on Tuesday, Nov. 23.

*The Nov. 9 rankings were released between games at Champions Classic.

How to watch CFP selection show

The rankings selection show will take place on ESPN and can be live streamed on the ESPN app. It can also be streamed via fuboTV, which offers a 7-day free trial.

Projected CFP rankings: Who are the top four teams in college football?