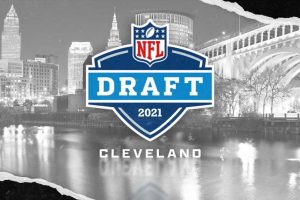 The 2021 NFL Draft concludes on Saturday with the final four rounds taking place on the third and final day of action.

As with the previous two days of coverage, ESPN and the NFL Network will air coverage of the draft; ABC, however, will not have its own dedicated broadcast, instead simulcasting from ESPN. Coverage begins at noon ET.

As has been the case for the first two days of the 2020 NFL Draft, Saturday’s presentation of Rounds 4-7 will broadcast live on ABC, ESPN and NFL Network. Teams will have five minutes to make their selections in Rounds 4-6, followed by four minutes for the seventh round.

Here’s everything you need to know about Day 3 of this year’s NFL Draft, including live stream info.

What time does the NFL Draft start today?

The 2021 NFL Draft concludes Saturday on ESPN and the NFL Network, with ABC simulcasting the former station. Saturday’s coverage begins at noon ET and will run through the 259th and final pick of the draft: Mr. Irrelevant.

Teams get five minutes to make selections in Rounds 4-6, followed by five minutes in Round 7. The final day of the NFL Draft should finish up by 6 p.m. or 7 p.m. ET.

What channel is the NFL Draft on today?

Anybody with access to broadcast TV (even without cable) can watch the NFL Draft on ABC for free. All major cable networks carry both ESPN (Xfinity channel 49) and NFL Network (Xfinity channel 265); Spectrum, Cox or Optimum cable customers can check with their respective carriers to find their viewing area’s specific channels.

ABC, ESPN and the NFL Network will all broadcast coverage of the 2021 NFL Draft, with ABC simulcasting ESPN’s coverage on Saturday instead of providing its own unique coverage.

Live TV streaming services include fuboTV, YouTube TV, Hulu Plus Live TV, Sling TV and AT&T TV Now all carry at least one of the channels broadcasting the 2020 NFL Draft. Those with connected TV devices (Xbox, PlayStation, Amazon Fire TV, Android TV, Apple TV, and Roku) can stream the NFL Draft with the NFL App, the ABC App or the ESPN App — with authentication with participating TV providers.

Similar options are available for those who wish to live stream the NFL Draft via mobile devices and tablets, which also includes the NFL Network App. Computer streamers can stream the draft with participating TV providers at NFL.com/Watch, WatchESPN and ABC.go.com.

In Canada, the NFL Draft can be streamed live on DAZN, which includes NFL Network coverage and offers a free trial period for new subscribers.