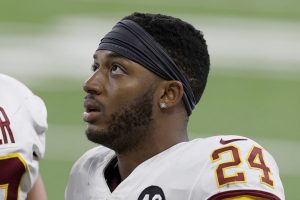 ﻿Antonio Gibson﻿ missed two December games in 2020 due to a turf toe issue. The Washington running back continues to deal with the lingering effects of that injury.

The second-year back told reporters Wednesday that while surgery wasn’t necessary, he is still rehabbing to get to 100 percent. Gibson said that while he can cut and run, it’s a situation that he must keep on top of so he doesn’t suffer a setback.

“It was something small that was causing me not to be able to run 100 percent,” Gibson said, per Nicki Jhabvala of the Washington Post. “But I’m fine now. I’ve been cutting in practice … and getting better each day. … Definitely something to monitor. I’ve been fine like I said. I’ve been cutting and running full speed, making cuts I need to make. … But I definitely got to watch and make sure I stay up on my treatment, so nothing goes south. But definitely watching throughout the time until I’m 100 percent.”

Gibson participating in OTAs is a good sign that the club isn’t concerned about the issue cropping up. But it’s a situation worthy of monitoring as we progress toward the regular season.

The 22-year-old back proved he could be a difference-making weapon out of the backfield as a rookie, highlighted by his 136 scrimmage yards and three TDs against rival Dallas on Thanksgiving. Transitioning from a college receiver to a full-time running back, Gibson showed he could be a three-down player when healthy.

Gibson projects as a workhorse in the NFC East champs’ offense with ﻿J.D. McKissic﻿ as the pass-catching back, ﻿Peyton Barber﻿ as the between-tackles sub, and ﻿Lamar Miller﻿ as a wild card if he makes the squad. Ensuring Gibson is 100 percent come Week 1 should be a priority in D.C. this summer.