Home » NFL » Vic Fangio on Teddy Bridgewater: 'He was courageous. He is our quarterback' 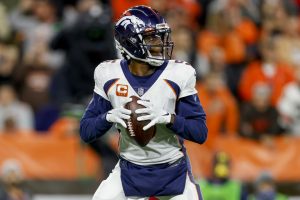 Hampered by foot and quad injuries, ﻿Teddy Bridgewater﻿ still started for the Denver Broncos on Thursday night against the Cleveland Browns despite bringing a questionable designation into the game.

After the Broncos were held scoreless in the first half, many believed that a dinged-up Bridgewater would be replaced in the second half by ﻿Drew Lock﻿.

“I did not,” Fangio told reporters following the Broncos’ fourth consecutive loss, a 17-14 setback against the host Browns, when he was asked if he considered making a QB change.

Bridgewater has started all seven games this season for the Broncos after winning a preseason QB competition with Lock and despite dealing with a concussion and the aforementioned foot and quad injuries.

“I thought he played good, especially there in the second half,” Fangio said. “I do not think Teddy’s injuries from my vantage point affected him that much. I thought that he was courageous. He is our quarterback.”

Bridgewater came out in the second half and kindled the Broncos’ offense with a 13-play, 79-yard touchdown march that concluded with an 8-yard touchdown pass to Melvin Gordon.

It was hardly stellar, though the second-half turnaround was a plus and it was an example of Bridgewater’s toughness.

“Honestly, I felt like I could go,” Bridgewater said. “We will attack the rehab this week. We were aggressive with everything we did and that gave me the chance to go out and play today. We just came up short. We have guys who just fight, fight for different things to try to make this team win. We just came up short.”

Sitting at 3-4 with a quartet of consecutive losses, Bridgewater realizes time is suddenly running thin and, injuries or not, victories are even more prevalent after Thursday’s loss.

“Yeah, there is definitely a sense of urgency not only to save the season but to win,” Bridgewater said. “Honestly, we look at it as a marathon and each week is its own race. Or it is a 17-round fight and each week is its own round. The sense of urgency is really just to win. We can’t look 10 weeks down from now, six weeks down from now. We’ve got 10 days to get this thing right. I think we got Washington next so we get another opportunity to go out there and compete, stay together and try to turn this thing around.”