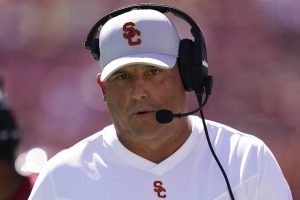 Two games and just one loss into the 2021 season, USC Director of Athletics Mike Bohn has seen enough of head coach Clay Helton.

Bohn fired Helton on Monday following a 42-28 loss to Stanford, abruptly ending his seventh season leading the Trojans program. Helton was 46-24 at USC, including a Las Vegas Bowl win as interim coach following the 2013 season.

“As I committed to upon my arrival at USC, during the past two offseasons we provided every resource necessary for our football program to compete for championships. The added resources carried significantly increased expectations for our team’s performance, and it is already evident that, despite the enhancements, those expectations would not be met without a change in leadership,” Bohn wrote in a statement.

Bohn named Donte Williams as interim coach; Williams had been USC’s cornerbacks coach. Despite the shakeup, Bohn’s expectations of Williams for 2021 remain high.

“This season is just getting started, and we have the opportunity to really do something special with this team and this program,” Bohn added. “I’m confident that our interim head coach Donte Williams gives us a higher probability for success the remainder of the season.”

Helton won a Pac-12 title in 2017 with an 11-3 team led by quarterback ﻿Sam Darnold﻿, who was the No. 3 overall pick in the NFL draft the following spring. But the Trojans slipped from there, losing 12 games over the next two seasons, and Helton never met the expectation of more consistent championship play at one of college football’s traditional, storied programs. In a pandemic-shortened 2020, USC went 5-0 in the regular season but lost to Oregon in the Pac-12 title game, 31-24.

Stanford routed the Trojans on their home field Saturday, holding a 42-13 lead in the fourth quarter.

A September coach firing after just two games is highly unusual timing, and figures to make recruiting very difficult for a coaching staff that likely wouldn’t be retained, in whole or in part, by Bohn’s eventual hire.

Per Bohn, the program will begin a national search for its next head coaching in the coming months.

USC plays at Washington State in its second Pac-12 game of the season on Saturday.