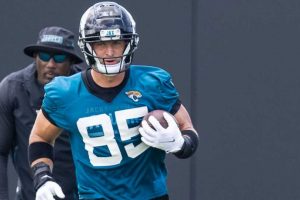 According to Meyer, Tebow — who is trying to convert from quarterback to tight end — is picking things up “decently” at his new position.

“Oh, Tim has done a decent job. We all know this is a new position for him,” Meyer said, per John Reid of the Florida Times-Union. “He’s a great teammate. In the locker room, I can see everybody getting along, we have good chemistry on our team. But he’s picked it up decently.”

That may not seem like a ringing endorsement, but considering that Tebow hasn’t played a regular-season NFL game since 2012 and spent the last five years playing minor league baseball, “decent” starts to sound pretty good.

That’s especially true when contrasting these comments to Meyer saying it was “awkward” seeing Tebow at tight end during his first practice.

Meyer also said that it is difficult to gauge exactly how players are doing until fully padded training camp practices take place.

“You wish you could see and do (more),” Meyer said. ”In spring football, you have full pads and scrimmages, and you can really evaluate, but it’s kind of tough right now.”

It may be hard to know exactly how Tebow stacks up, but it looks as if he’s putting up a fight as he attempts an improbable comeback.