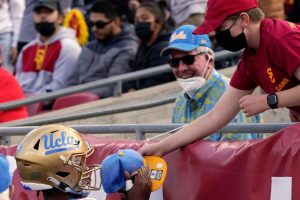 Moments after scoring on a four-yard touchdown run late in the second quarter, a fan wearing USC colors handed a UCLA hat and sharpie to Thompson-Robinson, who promptly signed it and gave it back. The impromptu celebration drew an unsportsmanlike conduct penalty and the 15 yards were assessed on the following kickoff with the Bruins leading 28-10.

Thompson-Robinson’s name will be inked in the record book, too. Prior to Saturday’s game, UCLA had never scored more than 48 points against USC, a total it eclipsed in the fourth quarter when he hurdled into the end zone on a 15-yard touchdown run to give the Bruins a 55-33 lead.