Home » NFL » Tyrod Taylor on role with Texans: 'It’s a wonderful opportunity for me to be able to go out and lead'

Tyrod Taylor on role with Texans: 'It’s a wonderful opportunity for me to be able to go out and lead' 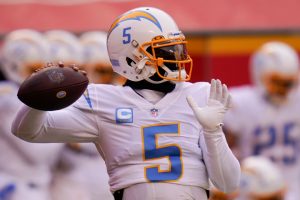 Tyrod Taylor﻿’s tenure with the Texans isn’t even three months old. But his circumstances couldn’t be more familiar.

The journeyman quarterback is penciled in as a bridge starter for a team in transition. It’s a situation he’s encountered before during stops with the Bills, Browns and Chargers, and alongside current Houston coach David Culley, and assistants Pep Hamilton and James Campen.

His relationship with the trio was a major draw in signing with the Texans. The biggest, though, was the expected vacancy at his position given the uncertainty surrounding Deshaun Watson.

“I think it’s a wonderful opportunity for me to be able to go out and lead,” he told reporters Thursday.

An opportunity in Houston initially presented itself after Watson requested a trade soon after the 2020 season. Taylor was acquired in free agency when the club had just one QB on its roster. The significance of that signing grew exponentially over the ensuing weeks as Watson was hit with 22 separate lawsuits alleging sexual assault or misconduct during massage sessions.

With Watson’s status for 2021 still unclear, Taylor is the projected starter on a depth chart that also includes Jeff Driskel and rookie Davis Mills. Last September, Taylor was starting for the Chargers ahead of 2020 No. 6 overall pick Justin Herbert until suffering a punctured lung following a pregame injection in Week 2. He would make just one more appearance all season as Herbert went on to win Offensive Rookie of the Year.

“I definitely use it as a motivation,” Taylor said. “There’s no bad feeling towards like whatever happened in the past. You learn from it, you move forward. I don’t believe in holding on to things. I just, like I said, I’m more so thankful and grateful for the opportunity to be able to lace the cleats up, put the helmet on and go out and make plays. It starts of course this time of year and then will carry on into the season. But yes, definitely more motivated than I’ve ever been.”

The 31-year-old QB isn’t alone. He recalled his Houston arrival from earlier in the offseason, which included several free agents signed to short-term contracts. It makes for a ragtag roster that Taylor asserted is eager to prove itself.

Taylor has accomplished as much in the past, helping the Bills break a postseason drought during the same season in which he briefly lost his starting job. Just providing stability, as he has throughout his 10-year career, would be a victory of sorts for a Texans organization that hasn’t had many of them in the past year.