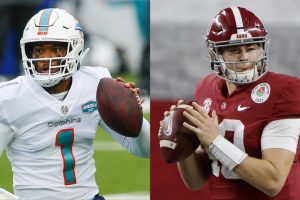 As the quarterback carousel turns within the NFL, so speeds up its collegiate counterpart.

Clemson’s Trevor Lawrence sits atop the carousel as its crown jewel while Ohio State’s Justin Fields, BYU’s Zach Wilson and North Dakota State’s Trey Lance race around underneath. Lost in the shuffle, though, is the quarterback who actually won the national title in 2020: Alabama’s Mac Jones.

A signal-caller who once had an outside shot at the Heisman Trophy, Jones has fallen behind those he outperformed in Heisman voting (Fields and Wilson) in the lead-up to the 2021 NFL Draft. Jones’ former teammate believes a handful of NFL teams are about to make a mistake akin to the one every team but one made in the 2000 draft: passing on the greatest quarterback of all time.

As we all know, mobility has never been Brady’s strong suit. In the rare instances when Brady would take off, it became thrilling just to see how it might end — a gain of four, perhaps? — not because it had the potential to be a highlight-reel run. But Brady cemented his place in football immortality with the rest of his game, meaning Tagovailoa sees Jones as a quarterback who’s like Brady in most important areas, and even better than Brady in his worst.

Like Brady, Jones’ teammates love him, too, Tagovailoa said. Tua would know — he played in front of Jones for three seasons, after all.

“He’s a really great person,” Tagovailoa said. “A lot of the guys, when I was playing at Alabama, they really loved being around his personality and who he was. So I’m thinking whatever team gets him they’re going to be very lucky. He’s a great player.”

Interestingly, Brady’s former offensive coordinator, Charlie Weis, also is enamored with Jones. He sees the Alabama signal-caller as the perfect fit for — guess who? — the Patriots because of the same character composition that made Brady into a future Pro Football Hall of Famer.

“What are the two most important components of a star quarterback?” Weis said on SiriusXM NFL Radio, via the New York Post. “They have the ‘it’ factor. And they’re accurate. That’s who [Jones] was.”

Tagovailoa can bank on not reuniting with Jones in the NFL, at least not in 2021. But he might end up seeing him a couple of times a year if Weis’ wish comes true.

Tua just wants another former member of the Crimson Tide on his side: running back Najee Harris.

“He’s going to be a fun guy to watch this upcoming season,” Tagovailoa said. “Hopefully we’re on the same team.”