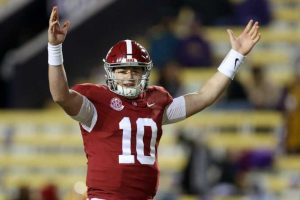 Mac Jones has a lot to live up to — before taking a single snap in the NFL.

As is custom, college athletes have a tendency of gassing up fellow alumni, so Tua Tagovailoa’s praise of his successor at Alabama, Mac Jones, should come as no surprise. Speaking on a Yahoo Sports podcast, Tagovailoa weighed in on Jones’ prospects in the NFL and heaped some heavy praise in the process.

Tagovailoa would also praise Jones’ smarts and leadership. The two shared a locker room for two years at Alabama.

Recently, NFL draft analysts have discussed Jones as a potential top-10 pick in the 2021 NFL Draft, with his floor having been discussed as nowhere past pick No. 8, where the Panthers are set to pick. As a pure pocket passer, Jones put up a dominant season performance in a championship-winning campaign in 2020, throwing 4,500 yards and 41 touchdowns to just four interceptions on the year.

While Jones is considered a first-round prospect by some, he has been knocked for a few things: not having one of the stronger arms in the class, limited mobility and athleticism, and a question of whether he was a product of a dominant offensive skill position group this past season.