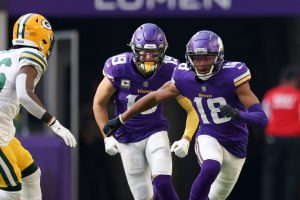 It’s a pass-friendly league, this modern NFL of ours, but in order to capitalize, a quarterback must have a pass-catcher or two he can depend on to make the grab.

There are few better feelings for a QB than being able to drop back to pass and know he can trust at least one of his receivers to help him out. The NFL’s pass-catchers, as a whole, are a collection of premier talent. But who stands out from the pack when it comes to proving themselves trustworthy, in good times and bad?

That’s the question I’ve attempted to answer this week with the help of Next Gen Stats. Here are my 10 most reliable pass-catchers through Week 12 of the 2021 season.

Seeing Kirk atop the list will probably come as a surprise to many, as he doesn’t have the notoriety of Pro Bowl teammates DeAndre Hopkins and A.J. Green, but that doesn’t discount his value to the Cardinals. Kirk is No. 1 here because he’s maximized his targets, posting a catch rate of 80.3 percent, which leads all NFL wide receivers (minimum 60 targets). His catch rate over expected is also significantly better than anyone else in the NFL at +13.6 percent. Because of the presence of Hopkins and Green, the Cardinals are able to put Kirk in the slot and create mismatches. Even when he’s covered well enough to reasonably expect an incompletion, he’s proving that expectation wrong, catching 15.9 percent more of his targets than expected when aligned in the slot. Cover Hopkins and Green as well as you can, but you better bring it when Cardinals quarterbacks throw Kirk’s way.

You know the saying by now: Third-and-Renfrow. It’s not shocking, then, that one of the league’s most reliable receivers on the ever-important third down landed on this list. The numbers validate the phrase, as Renfrow has posted the fourth-highest catch rate over expected on third-down targets (+9.2%) among receivers with at least 25 such targets. Renfrow is also finding open space with his shifty, if not unorthodox, route running. He has popularized the “China” route and has made it his own to shake defenders for touchdown grabs. He did it against the Chargers in early October, and ran a variation of a whip route for a touchdown against Kansas City a few weeks ago. It’s a nightmare for defenses and has helped Renfrow post the third-best catch rate over expected on targets of fewer than 10 air yards this season (+6.1%).

Godwin is another player on this list who might not be widely considered his team’s WR1, as he lines up opposite three-time Pro Bowl selectee Mike Evans. Godwin has proven to be the Bucs’ most reliable receiver, though. He has hauled in 76.1 percent of his 88 targets this season. Only three players have a higher catch rate among receivers with at least 60 targets. He’s been highly reliable in the short game, with a catch rate over expected of +4.4 percent on targets of fewer than 10 air yards this season (sixth-best among WRs, minimum 40 such targets), and he’s racked up 15 receptions when in the red zone, which ranks second in the league. Tom Brady loves to throw the fade to Evans in the end zone, but Tampa Bay tends to get into that position by first throwing to Godwin. It’s the right idea, as the Bucs have learned.

The league leader in receptions and receiving yards naturally had to make this list, right? Kupp has seen an incredible 126 targets this season, catching 92 of them, which doesn’t quite produce the best catch rate due to sheer volume and external circumstances, but he’s still among the league’s top seven in that department at 73 percent. He’s helped Matthew Stafford post a 117.1 passer rating when targeting him, essentially guaranteeing a positive outcome when throwing his way. This isn’t just a case of Kupp capitalizing on safer targets, as he’s produced a catch rate over expected of +5.5 percent on throws of 10-plus air yards. Add in his +7 percent catch rate over expected on targets down the seams (fourth best in the NFL) and you have a well-balanced volume receiver who is clearly the go-to option in Los Angeles.

Jefferson’s rookie season might have been seen as a flash in the pan by the haters entering 2021, but they’ve quickly learned it was no fluke. Jefferson is a legitimate weapon and one of the league’s best receivers in only his second season, and though his catch rate falls slightly below his teammate Adam Thielen’s, he’s been spectacular enough (especially in key moments) to leap past his fellow Viking on this list. Jefferson owns the league’s best catch rate over expected on targets of 10-plus air yards (+13.4 percent) and the best catch rate over expected on targets outside the numbers (+14.5 percent) among receivers with at least 35 such targets. When considering the latter, a key third-down reception in a recent win over the Chargers immediately comes to mind. Jefferson fought through tight coverage, leapt to catch a pass from Kirk Cousins and tapped both feet in bounds to move the chains and help the Vikings hang on for the win with a highlight grab. He’s done that plenty and is certainly deserving of a place on this list.

One of the NFL’s elite receivers might typically end up higher on this list, but sixth place is no knock on Adams, Aaron Rodgers‘ No. 1 target in almost any situation. He’s only in this place because his numbers — again, a likely product of a higher volume of targets (115) — don’t quite stack up against some of the more notable achievers in this group. Still, Adams, like Justin Jefferson, ranks first in at least one notable category when it comes to catch rate over expected. His CROE on targets down the seams is the best in the NFL at +9 percent, and we already know how effective he is when aligned wide and in the slot. Adams has earned a lifetime’s worth of trust from Rodgers, who doesn’t shy from airing it out in No. 17’s direction. Adams has rewarded Rodgers, recording the fourth-best catch rate over expected on targets of 10-plus air yards (+7.8 percent). Throw all of this together with his catch rate — which is still at 69.6 percent — and everything else we know about Adams’ time in Green Bay and well, he’s a lock for this list.

The second Viking on this list, Thielen has taken a backseat in notoriety to his younger counterpart, but that hasn’t diminished his value as a reliable pass catcher — especially in key moments. Thielen has made catches at a rate of +9.3 percent over expected on third down, the third-best rate in the league (min. 20 targets). He’s been a great option opposite Jefferson, finding success aligned wide and inside, posting a +7 percent catch rate over expected on targets down the seams (fourth-best in the NFL). Thielen has caught 70 percent of his 90 total targets, posting a total catch rate over expected of +5.2 percent, and he’s continued to be the trusty receiver who serves as the perfect complement to the rising Jefferson.

When Cooper Rush desperately needed a touchdown pass to put the Cowboys ahead late in Dallas’ Week 8 win over Minnesota, he turned to the man the Cowboys can trust most: Cooper. The receiver hauled in the 5-yard touchdown pass in the back corner of the end zone to give Dallas the lead and soon after, the win, perfectly capturing his importance to the Cowboys’ offense. While CeeDee Lamb is the emerging receiving talent in Dallas, Cooper has proven to be the ultra-reliable option, catching passes at a rate of +10.5 percent over expected, the third-highest mark in the NFL (min. 50 targets). He’s been especially effective exceeding expectation on the perimeter, posting the highest catch rate over expected on targets when aligned wide this season at +16.7 percent. So while Lamb is exciting and a quality target, Dak Prescott (and for a brief period, Rush) is armed with more than one go-to receiver. When in need, throw Amari’s way.

If you’re not paying a ton of attention to the Dolphins right now (you probably should since they’ve won four straight), at least spend some time this week watching Waddle highlights. The rookie has lived up to the lofty expectations set for him coming out of Alabama with the sixth overall pick, catching nearly 75 percent of his 103 targets this season and scoring four touchdowns. What has made his debut season even more impressive is that he’s had so much success despite so much change under center in Miami, having to build a rapport with both Tua Tagovailoa (63 targets) and Jacoby Brissett (40). Waddle is tied with Justin Jefferson for the most receptions when targeted on third down (24), and he owns the second-best catch rate over expected on targets of fewer than 10 air yards this season at +6.8 percent. The youngster has quickly proven himself capable of adjusting to the pro game no matter who’s throwing him the ball, making the latest DeVante Parker absence much more bearable for the Dolphins.

Our only tight end on this list, Hockenson earned his spot in part because he’s seen more targets than any other pass-catcher on the Lions’ roster. Jared Goff has relied heavily on Hockenson because, well, the Pro Bowl tight end has proven he’ll catch the ball more consistently than any of his teammates. Although he and rookie receiver Amon-Ra St. Brown are tied in catch percentage (75%), Hockenson’s reliability stands out when you consider he’s seen a significantly higher volume of targets (76 to Brown’s 52). But enough with splitting numerical hairs. Hockenson owns the best catch rate over expected on targets of fewer than 10 air yards — his wheelhouse as a traditional tight end — and his +5.4 percent catch rate over expected is the second best among NFL tight ends this season. He’s also expanded his capabilities, recording a catch rate over expected of +8.3 percent down the seams (-1.2% in 2020). The Lions have some roster renovations still to complete, but Hockenson has been one of the lone bright spots for Detroit’s offense this season.