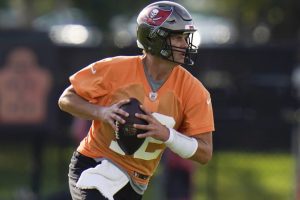 Tom Brady moved south and led his new team to a Super Bowl last season, but it took him until this offseason to truly find the confidence needed to speak his mind.

You can rightfully scoff, but that’s what Brady said Friday. Apparently, he didn’t waste much time using it.

“I’ve found my voice more. I really enjoy being around my teammates, my coaches,” Brady said following Tampa Bay’s Friday practice. “It’s been a different environment. Just really enjoying the experience of playing football, playing with this group of guys. You guys are catching me on a bad day today. We had a really (expletive) practice, so I’m not feeling great about what we did today. It is what it is.”

Brady has undoubtedly earned the right to be critical of his team’s performance when he sees fit. His seven rings speak for themselves, and if anyone knows what it takes to win in the NFL, it’s Brady.

At 43 years old, Brady also might be the most qualified player in the NFL to fill the role of disappointed parent. It’s evident in Brady’s tone that he isn’t about wasting any time and won’t stand for any semblance of complacency among his teammates, even in late July.

His teammates have noticed.

“Tom’s a great guy, a fun guy to be around,” receiver Scott Miller said. “It’s probably a little tougher for him, he’s around a bunch of 20-year-old kids. He’s almost like our dad, like Devin (White) said. But no, he’s great, he’s fun to hang out with.

“But at the same time, as you guys see, he takes this very seriously. He’s all about winning. We’re not going to have fun if we’re not winning. So that’s the goal. We’re going to come out here and just compete every single day. He doesn’t take anything for granted and he wants to go win another one.”

Brady talks a big game, sure — as he’s said, his favorite ring is “the next one” — but he has the hardware to back it up. He’ll stop at nothing to ensure his team has the greatest chance possible to win another title, even if that requires some Friday morning scolding.