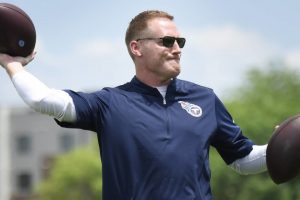 The Tennessee Titans remain one of several teams rumored to be considering trading for Atlanta Falcons star receiver ﻿Julio Jones﻿. A look at their pass-catching corps explains part of the connection.

The Titans lost former first-round pick ﻿Corey Davis﻿ and tight end ﻿Jonnu Smith﻿ in free agency. The most significant move they made to replace those playmakers was adding free agent ﻿Josh Reynolds﻿.

﻿Ryan Tannehill﻿’s targets are Brown and a massive question mark.

“I’m excited about the competition we have at the different spots on offense,” he said, via the team’s official website. “My job is to coach the guys that are here, and I’m doing that to the best of my abilities each day. I think you’re going to see some growth from some of these guys, and I’m excited to see where they end up.

“I am very comfortable with the level of competition we have there — I think we have a wide variety of skill sets, and I am excited to see these guys take opportunities to step in and get some extended reps. I am fired up to see where it goes.”

On one level, what is Downing supposed to say? He’s dealt a WR corps without an apparent second option behind Brown. He’ll plow forward until that changes — either with a trade or one of the players on the roster standing out.

Asked specifically about Reynolds’ ability to step up to the plate after compiling 1,450 yards and nine TDs total the past four years, Downing seemed optimistic about the 26-year-old’s ability to play both inside and outside at 6-foot-3.

“I think he is hungry, and I think he knows the game,” Downing said. “I think he has really good savviness to him, and a good football IQ. I am excited to see where he can increase.”

Reynolds is coming off his best season, making a career-high 13 starts, earning 618 yards with two scores. Those aren’t numbers that scream consistent No. 2, but there is room to grow.

Unless Reynolds makes a big jump or the Titans take the huge swing for Jones, Brown is looking like he’ll have a massive target share in 2021. That’s just fine with Downing.

“A.J. fits into the playmaker category,” the new OC said. “Those are guys that you look for ways to get them the ball, and rely on their strengths, and hope that they can continue to ascend just like everybody else. I don’t think there’s a guy on offense that we feel like has arrived, is a complete product, and A.J. is going to continue to work hard to improve in every area that he can, and I’m excited to see the production that he can have for us.” Downing said the team will look for ways to get him in single coverage to help him be successful. “It will be fun to watch him progress, and see where we can move him around. (We’ll) expand his route tree a little bit and watch him have successes as we expand it.”

Even with Downing’s positive stance regarding his receiver room, the Jones-to-Tennessee rumors won’t slow until the Falcons take him off the trade-block or he’s dealt elsewhere. The chatter being spurred by Brown publicly campaigning for the trade only adds fuel.