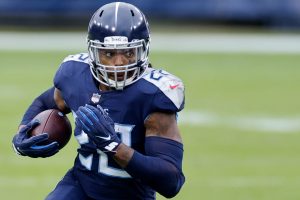 ﻿Derrick Henry﻿ is the NFL workhorse among workhorses.

On Thursday, Titans coach Mike Vrabel noted that Henry’s work ethic allows the back to be successful despite the heavy workload.

“It’s no secret that Derrick is a large part of what we are, and who we are as a football team,” Vrabel said in a Q&A with season ticket members via the team’s official website. “We try to be smart as we prepare. Nobody prepares for the rigors of the season more than Derrick. I’m not going to say that Derrick is the hardest working player in football; I wouldn’t do that to the players around this league. But I can’t imagine that any of them work harder than he does, and he understands that, and the toll that he is going to take.”

Henry became the eighth running back to pass the 2,000-yard barrier in a season. Eric Dickerson set the rushing record at 2,105 yards in 1984, which hasn’t been touched.

The previous seven haven’t come close to hitting back-to-back 2,000-yard seasons. Barry Sanders had the most yards in a follow-up 2K season when he went for 1,491 in 1998.

With an added 17th game this season, records could be broken with more ease in the future. Workloads might also be managed more judiciously by coaches who want to stretch out a player’s touches through the extra game without a significant increase.

The wear-and-tear of taking 300-plus carries every year has proven to take its toll. Vrabel, however, kidded season ticket holders concerned about that workload.

Added the coach: “We’ll always try to do what is best for the team, and what is best for Derrick. Just be smart and make sure he is communicating with us and how he feels, and we’re evaluating his performance.”

At this point, there is no one on the Titans’ roster who should threaten King Henry for touches. He’ll remain the NFL’s top workhorse so long as injury doesn’t strike for an RB who has missed just two games in his entire career.