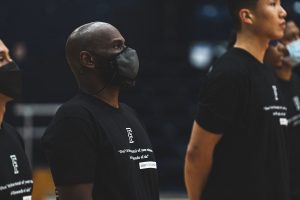 College basketball coaches throughout the country have found ways to honor the late John Thompson, like sporting his signature towel on the shoulder look. But for Cal State Fullerton head coach Dedrique Taylor, he found a way to honor not just Thompson, but other Black coaches that paved the way for him.

Taylor is in his eighth season with the Titans after spending years as an assistant at numerous west coast schools, including Arizona State. He grew up with a father who coached high school basketball in Southern California, and remembered as a kid watching Thompson, his Georgetown Hoyas and Big East basketball.

Like many, he was saddened when he learned Thompson passed away on Aug. 30 at 78. But it was a couple of weeks ago when Taylor came up with his way to honor Thompson and other Black coaches.

Each quote resonated with Taylor, as he found them open-ended, urging people to achieve success.

“It's important to acknowledge them not by just saying their name, but acknowledge them and things that we do on a day-to-day basis. That’s the way, in my opinion, that you honor them, and you acknowledge them and you carry their legacy forward,” Taylor said. “More than anything, I just wanted the coaches to see their name represented amongst all of the other Black head coaches, and give them a sense of pride.”

The shirts were sent to each coach that had their name on the shirt, which Taylor said many of them have since thanked him for. On Feb. 13, Butler head coach LaVall Jordan wore the shirt against the Hoyas.

Jordan said it was an honor to wear the shirt and he felt humbled to see his name on it.  What Taylor did reminded him of Thompson.

PLANS IN PLACE:  What if an NCAA Tournament team is impacted by COVID-19?

Thanks to @CSFCoachTaylor for the shirt as a way to honor coach Thompson & a reminder that it’s bigger than basketball & it’s bigger than all of us. #KeepLeadingKeepTeaching#FightOnhttps://t.co/FoLd9Ynp64

On Monday, Oklahoma State head coach Mike Boynton wore his during the Cowboys’ upset against No. 17-ranked Texas Tech.

Tonight @thacoachmike will wear a shirt featuring the names of every Black head coach in Division I.

Taylor wore his this past weekend, along with the entire team, in their series against in-county rival UC Irvine. On Saturday, he won his 100th career game as Fullerton’s head coach.

“It's another opportunity to honor the past. I wouldn't be in the position that I'm in if it weren't for John Chaney and Coach Thompson and Coach Raveling and Paul Hewitt and Dave Leitao and Cuonzo Martin,” Taylor said.

Despite the progress Black coaches have made in college basketball, Taylor acknowledged there is a difference in expectations compared to white coaches.

“They expect you to get it done in three or four years, or they fired you,” Taylor said. He added that it takes time to be successful and some bad moments will happen. But no matter who the coach is, they need the support and resources to thrive.

“I think coaches across the board, Black coaches in general, can do that, when they're given the right opportunity amongst those circumstances,” Taylor said. “But for whatever reason, we're not given those opportunities at the level I think our counterpart is.”

Despite the lack of opportunities, Taylor said that Black people have proven they can play and coach the game, such as Michigan head coach Juwan Howard, who in his second season has the Wolverines atop the Big Ten and vying for a No. 1 seed in the NCAA Tournament.

"Those guys pick up the phone and help mentor guys like myself," Jordan said. "That generation really set the foundation."

Taylor said a benefit of being a Black head coach is that he can relate to players who look like him, something he experienced after playing basketball at UC Davis.

NCAA TITLISTS:  What Texas Western's Black players and white coach did in 1966 continues to ripple

The back of the shirts made by Dedrique Taylor list all 98 Black head coaches in Division I men's college basketball. (Photo: Courtesy: Uriel Gutierrez/Cal State Fullerton Athletics.)

Taylor spent a summer working out with former Los Angeles Lakers’ guard Eddie Jones, who played for Chaney at Temple. Jones had talked about the impact Chaney had on him, and the care that he had for each of his players. The lessons he learned from Chaney, Thompson and the numerous trailblazers are lessons that continue to motivate him to be the coach he is today, and leave the same impact on players.

“They showed a great deal of pushing them and putting them on the edge to try to get their best every single day and helping them form those habits that make them the successful gentlemen that they are today,” Taylor said. “Being a part of other people's success, seeing other people being successful and being excited, that's where I get my excitement and my joy."