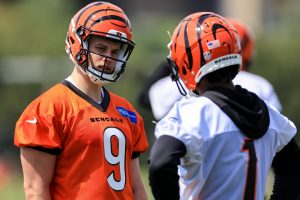 On Sept. 13, 2020, Stefon Diggs caught his first professional regular-season pass from Josh Allen. Diggs went on to catch 126 more, finishing with 1,535 receiving yards and 127 catches, the most in the NFL on both counts.

Each offseason inevitably brings a host of new QB-pass catcher combos, as veterans change teams and rookies are brought onboard. But they don’t always click as well as Allen and Diggs in Buffalo, or, say, Kyler Murray and DeAndre Hopkins (Hopkins finished with 115 catches and 1,407 yards) in Arizona or even Kirk Cousins and rookie Justin Jefferson (Jefferson finished with 88 catches and 1,400 yards) in Minnesota.

It’s a tad early to say which of this year’s new partnerships will be the most fruitful, but I can tell you which QB-pass catcher combos I’m most excited to see in action. To form the ranking of the most exciting new QB-pass catcher combos below, I considered all potential QB-pass catcher partnerships wherein the players involved have never worked together at the NFL level before. (As you’ll see in multiple instances, this did not preclude ex-college teammates.) And, of course, it’s important to note that Julio Jones remains a member of the Falcons — should he be traded, he and his new QB would likely earn a spot somewhere on this list. (A similar caveat applies to the prospect of any major QBs changing teams, like, say, ﻿Aaron Rodgers﻿.)

Tua Tagovailoa is feeling healthier and more comfortable than he did in 2020, meaning he won’t have many excuses to not take a major step forward in 2021. The addition of a familiar face from Tagovailoa’s days running Alabama’s offense should make the QB even comfier. Jaylen Waddle never led the Crimson Tide in receptions or yards in any of his three years there, but he packed a lot of punch into his touches, racking up 18.1 yards per catch during the seasons he spent with Tagovailoa as the starter (2018 and ’19) and finishing 2020 with an outstanding 21.2 yards per reception. I think Waddle might be the Class of 2021’s best overall receiver, and I expect him to provide a game-breaking element that the Dolphins’ offense in general — and Tagovailoa specifically — sorely missed last season.

Joe Burrow got what he lobbied for before the 2021 NFL Draft: a reunion with one of his favorite targets from LSU. The last time Burrow and Ja’Marr Chase worked together, in 2019, Chase won the Fred Biletnikoff award after amassing 1,780 receiving yards and 20 touchdown catches, both SEC records at the time. The key to this tandem picking up where they left off will be whether Cincinnati did enough — signing Riley Reiff and drafting Jackson Carman in the second round — to address last year’s issues on the offensive line, especially after the team passed on premium-tier tackle prospect Penei Sewell to take Chase fifth overall.

Jets general manager Joe Douglas obviously made it a priority to provide No. 2 overall pick Zach Wilson with plenty of support after Sam Darnold fell short in New York in part because of a lack of help. Signing Corey Davis was key to that effort. In 2020, Davis had the best year of his four-year NFL career, catching 65 passes for 984 yards (15.1 yards per catch) and five touchdowns. He also ranked third among players with 90-plus targets in catch rate above expectation (plus-9.6%) last season, per Next Gen Stats, behind only Stefon Diggs and Davante Adams, generating a passer rating of 123.6 when targeted. While I currently expect Davis to be Wilson’s top target in 2021, Elijah Moore — who showed superstar potential at Mississippi last season — should also do a lot to help Wilson get off on the right foot as a rookie.

Robby Anderson will ease new quarterback Sam Darnold’s transition to Carolina, given that Anderson was a favored target of Darnold’s in 2018 and ’19, when both players were with the Jets. And you couldn’t ask for a better pass-catching option coming out of the backfield than a newly healthy Christian McCaffrey, who twice set a single-season record for receptions by a running back (in 2018 and again in 2019) before losing much of 2020 to injury. But I really like Darnold’s chances to build a rapport with D.J. Moore, who is coming off a second straight 1,000-yard season. Moore figures to be a key deep threat for Darnold, given that he ranked third in the NFL in yards on deep targets (440) in 2020, finishing third in yards per deep target (18.3) and catch rate above expectation on deep targets (plus-16.9%) among those with 20-plus such targets, per Next Gen Stats.

Zach Wilson isn’t the only Big Apple quarterback whose new pass-catchers should have him smiling. Kenny Golladay was the top receiver on the free-agent market, and he was paid as such, landing a contract for four years and $72 million. For their money, the Giants were able to give Daniel Jones the first bona fide No. 1 receiver of his NFL career. Yes, Golladay struggled to stay healthy in 2020, but he also has a pair of 1,000-yard seasons on his resume, including his 2019 Pro Bowl campaign, when he led the NFL with 11 TD catches, and you can’t underestimate the importance of a trustworthy, difference-making target in a QB’s development. Between Golladay, explosive rookie playmaker Kadarius Toney, veteran tight end Kyle Rudolph and the return to health of running back Saquon Barkley, Jones’ supporting cast will be as good as it’s ever been — which means the Giants will have a clear idea of whether the 2019 first-round pick is a franchise QB by season’s end. (For the record, I think the answer to that question is yes.)

Here’s something worth knowing about Kyle Pitts: He changed high schools because his initial school wanted him to play quarterback, but he was more interested in being a tight end. After the Falcons made Pitts the highest-drafted tight end in the modern era (at fourth overall), it’s safe to say Pitts’ instincts were sound. There will be a large offensive void in Atlanta if the expected trade of Julio Jones materializes, and Pitts could help fill it. He was unstoppable at times at Florida because of the coverage mismatches generated by the combination of his size (6-foot-6, 245 pounds) and athleticism. Though tight ends typically struggle to make an impact as rookies, Pitts could be the exception working with Matt Ryan, who once thrived throwing to Hall of Fame-tight end Tony Gonzalez.

One of the reasons Carson Wentz failed in Philadelphia was a dearth of reliable receiving options, and the hope is he won’t experience that same problem after being traded to the Colts this offseason. Though T.Y. Hilton is 31, he’s coming off a strong close to the 2020 season (24 catches for 408 yards and four touchdowns in Weeks 12-16), while third-year pro Parris Campbell, who has struggled with injuries but shown promise, is another player to keep an eye on. But I’m particularly interested to see how Wentz works with Michael Pittman Jr. The 2020 second-round pick didn’t exactly pop as a rookie, dealing with a leg injury that required surgery. He ranked 11th among all rookie receivers in catches (40) and 10th in yards (503) last season — but I think he’s got the potential to double those numbers in 2021. The sample size is small, but the three games in which Pittman was targeted seven-plus times were also among his most productive, with the receiver accounting for 13 catches and 185 yards (14.2 yards per catch) in those contests.

Jalen Hurts has to prove he can be a franchise quarterback this season — otherwise, the Eagles will move in a different direction in 2022, when they’ll have more cap space and two to three first-round picks (whether the 2022 pick acquired from Indy in exchange for Carson Wentz will be a first- or second-rounder is dependent on how much Wentz plays). So I’m expecting to see Hurts lean a lot on DeVonta Smith‘s playmaking ability. The 10th overall pick adds instant juice to an Eagles pass-catching corps that, as mentioned in the Colts’ blurb, helped hasten Wentz’s exit from Philly. After all, while Smith was catching 117 passes for 1,856 yards and 23 touchdowns en route to winning the Heisman Trophy in 2020, the Eagles were failing to field a single player who could log more than 53 catches or 539 receiving yards. Oh, and though Hurts and Smith didn’t peak at Alabama at the same time, they did spend time on the field together, and that has to count for something. 2020 first-round pick Jalen Reagor could also lend a hand if he’s able to learn to run routes better.

New Washington QB Ryan Fitzpatrick has shown at OTAs that he still isn’t afraid to wing it downfield. That willingness to throw deep means Washington should improve its ranking in yards per pass attempt, which sat at 30th (6.3) in 2020. Terry McLaurin‘s career numbers on deep targets aren’t too shabby (14 catches for 500 yards and four TDs on 38 targets over the past two seasons), despite two of his main quarterbacks, Alex Smith and Dwayne Haskins, posting abysmal passer ratings on targets of 20-plus air yards in that span (42.7 and 7.5, respectively). The fact that a good chunk of McLaurin’s production came with a successful deep passer (Case Keenum, who posted a rating on deep passes of 99.0 with Washington in 2019, was the QB on five of McLaurin’s deep catches, accounting for three TDs and 186 yards) is a good sign. Because Fitzpatrick finished the last two years with a deep-target passer rating of 103.0 — meaning we could see a serious uptick in this area for McLaurin.

Cooper Kupp and Robert Woods were among the NFL’s more productive receivers when catching passes from Jared Goff. The Rams are hoping that a QB with Matthew Stafford‘s passing ability will help the pair hit even greater heights. Of the two of them, I have an especially positive inkling about Kupp to thrive as the passing attack bounces back from a relatively down year; just take a gander at this nifty practice-field connection between the two. Beyond Kupp and Woods, L.A. took a flier on DeSean Jackson, whose injury problems have kept him from remaining one of the league’s premier deep threats — but if the 34-year-old can remain healthy, watch out. And don’t sleep on rookie Tutu Atwell, either.