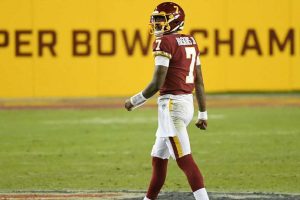 Taylor Heinicke didn’t get a photo or a rating on his 247Sports recruiting profile when he attended Collins Hill High School. Dwayne Haskins received a shot of him grinning in a white Nike T-shirt, a consensus four-star rating and scholarship offers from the likes of Ohio State, Alabama and Florida.

Heinicke was anonymous in college at Old Dominion. Haskins was one of the most scrutinized quarterbacks in the country during his time with the Buckeyes.

So, it was Haskins who seemed to hold the future of the Washington Football Team when he was selected No. 15 overall in the 2019 NFL Draft. Heinicke predictably went unpicked and found his way to Washington after being released by four other teams.

But on Saturday night, with Washington making its first playoff appearance since 2015, Haskins watched unemployed from home as Heinicke impressed fans with his composure and scrambling ability against the Buccaneers. He looked like Russell Wilson on an 8-yard touchdown rush in the third quarter, weaving through defensive linemen to the end zone. His performance as an undrafted fill-in on a big stage offered a reminder to some people of how much of a bust Haskins had to have been to no longer be with the organization at this point.

Haskins was released earlier in the season as the result of his poor conduct around the team and lack of development under center. He’ll enter the 2021 offseason without a home.